Izakaya Tajima (formerly known as Tajima 2) I had enjoyed lunching a few times until their hours got very confusing. After one too many drives down only to find the Open Sign unlit I had thought they were done with serving lunch for good.

But early this week heading to Santouka in Mitsuwa Market for a quick slurp, I found Izakaya Tajima's sign on and so instead turned into the "Boot Barn Mall" where they reside and decided to check them out.

I'm now guessing they were only temporarily closed for another interior redo because as I entered through an unfamiliar new entrance, I also noticed a different interior layout. No more large communal tables but instead many private cubbyholes along the parameter of the restaurant surrounding the central kitchen. All this and a new splashy website to complete the refresh.

Needless to say I was very happy about this because I'm the type of person who gets excited about Japanese places that offer more than Teriyaki Chicken and California Rolls.

This day I had one of the lunch special noodle combos (8.95) - Pressed Mackerel Sushi (Battera) and Udon (hot).. 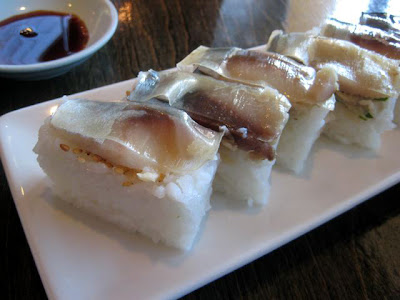 I've only had Battera one other time and quite some time ago at that but the one here was pretty good. The lightly marinated Saba along with a thin layer of Kombu sandwiched Shiso leaves and Sesame Seeds between the sushi rice. 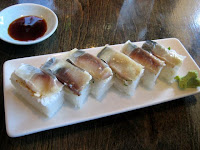 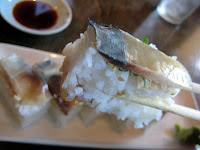 All tightly pressed in a mould and then sliced to create perfectly rectangular sushi treats. The rice although slightly on the mushy side was still warm with a good subtle vinegar flavor and I enjoyed these a lot. I would definitely have this again.

Forgot to mention I was very hungry so I also ordered an Anago (Sea Eel) Tempura as a side, mostly to go with the Udon that was on its way. 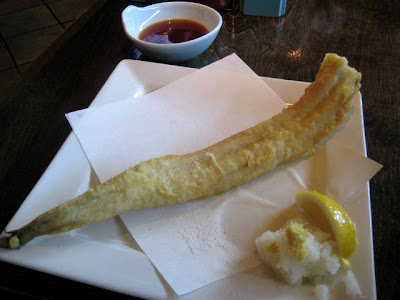 Unlike pressed sushi I have had quite a few scrumptious Anago Tempura in the past. So I had set my expectations accordingly to be fair. Poor farmed Eel can have a gummy thick skin but this wasn't the case here and while it wasn't quite as fluffy as what I've had at specialized Tempura eateries it was still adequately soft and tasty.

I enjoyed having it with several choices of sodium.. 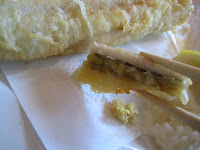 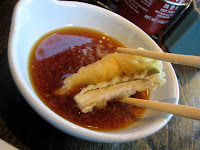 Just with a dash of salt or dipped in Tentsuyu and even at times with a light drizzle of Soy Sauce.

The Udon was good too. 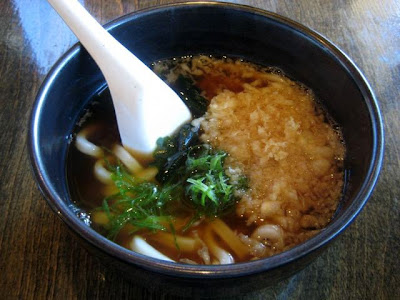 The basics with some Tenkasu bits, Wakame Seaweed and Scallions. The Anago went well with it. 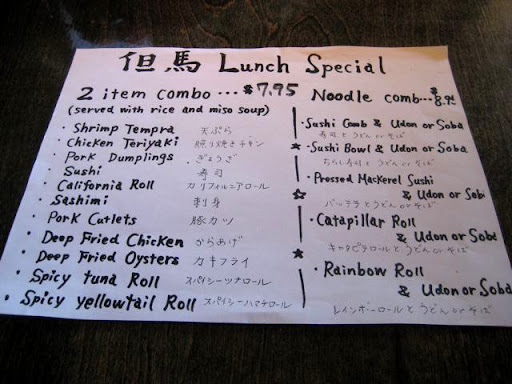 Along with these other Lunch Specials is a full Izakaya menu, many shared with the original Tajima.

An extremely diverse menu, competitive prices and good eats. I don't think I can ask more for a Japanese lunch spot!

Oki Ton Japanese Bistro I visited a few weeks back. It had been a long while since my last visit as well. My impression was that it was expensive and it could be. I think I splurged on one of their $18+ Pork Tenderloin Hire Katsu plates and was less than impressed.

But I also did remember that they had a pretty good miso soup (at least for my taste). It had a more pronounced Dried Fish Stock flavor and I was curious to see if that was still the way they were serving it.

Contents were humble with tiny bits of silken tofu and wakame but I was happy to see that the soup was still the same. 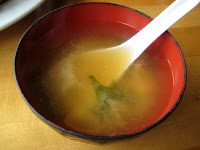 I also discovered this day that if you order from their Lunch Specials Menu, it is possible to come away from the place unscathed.

So I thought I should try something Katsu again and the Chicken Katsu Sandwich I had was indeed redeeming ($8.50). 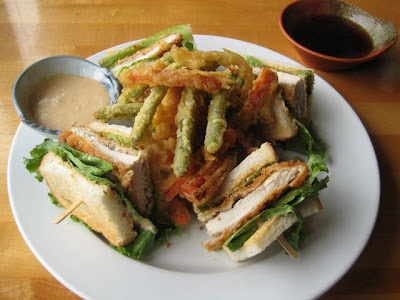 A freshly deep fried panko breaded chicken breast surprisingly tender and moist. Really sad to say "surprisingly" because this is really the way all katsu should be everywhere. 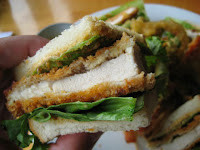 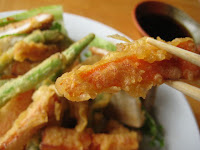 Very good but if I were to be picky, I didn't care too much for the Sandwich Spread like flavor that made it more like a western dish. Just a personal preference thing I guess but it did have a nice hot mustard kick that I did like about it.
The Veggie Tempura also hot and fresh. A perfectly good and filling complement to the sandwich to take you to deep-fry heaven.

The cold tofu Hiyayakko on the other hand for $4 was overpriced. 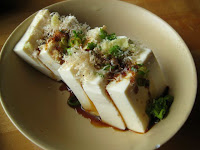 When you think you can get these at Sakura and Tajima.. 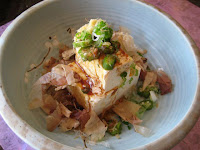 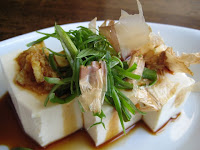 ..for $2.50 and $2.95 respectively.
Cheaper and much more substantial although maybe hard to tell by the photos.

I had asked to leave the menu as usual and while I was scanning through with maybe the focus of an autistic person to a phonebook, I saw something that caught my eye. 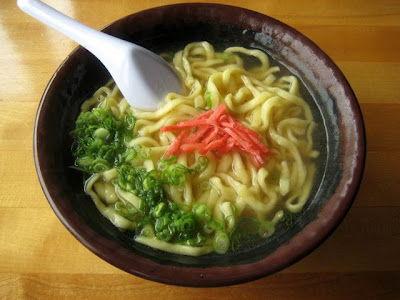 I almost forgot the fact that Oki Ton's name and concept was a tribute to the owner's few years experience in Okinawa. Judging by the menu offerings, a loosely based concept but still, I probably haven't had Okinawa Soba in over 15 years.

While the pure nostalgia of the flavors were overwhelmingly soul cheering, hard to highly recommend with lack of any protein even at the relatively bargain price. 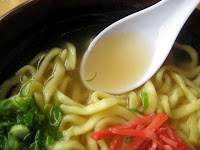 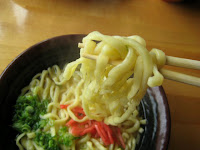 I know asking for Soki would be too much but a few fish cake Kamaboko slices would've been nice.

Overall the experience was very positive and while having the rest of the sandwich later the evening for dinner, I was already browsing through their menu photos on my monitor to see what I could get next. Maybe the Spicy Tuna Burger. 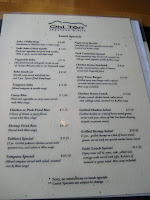 A home style Japanese restaurant like this reminds me of the days I used to stop by after work everyday in Japan. So nostalgic.