Yikes, swamped and quite tired for several weeks now. What I thought would be a quick timely coverage has taken me four nights of nodding in front of my laptop to put together this now Jurassic fossil of a post.

Well hope some people made it to Mitsuwa's "Explore Diverse Flavor of Japanese Cuisine" Fair last week. The concept wasn't so different from the Umaimono Gurume (just six weeks ago) but there were a few different stalls with emphasis on diverse regional cuisines of Japan. As with my last post this will lean heavy on the Ramen offerings (I owe Edjusted at ramenramenramen.net last week for the tip, thanks Ed!). The foods are a bit on the high side but they are definitely fun to try. At least this time around though the close to $9 ramen samples seemed to be a decent serving portion for a first. :P 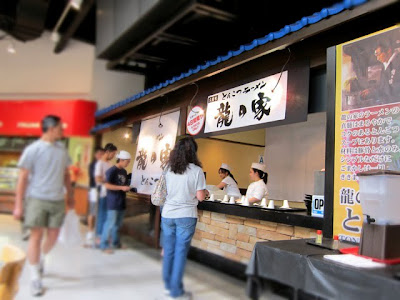 This go I ended up at the Torrance branch first. Was busy but nothing like the lines at the last Umaimono Fair with Chibakiya present. I'm wondering if the crowd picked up later since I arrived a bit early while my stop at Costa Mesa after a day's worth of errands was quite late. Anyhow Tatsunoya was serving up their version of Tonkotsu Ramen. Something I felt I missed out on last and really wanted to try. 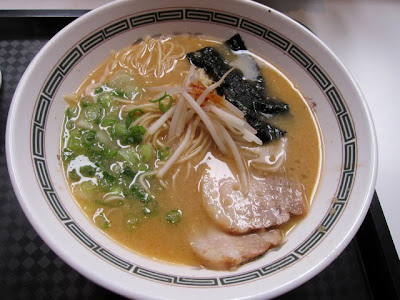 According to Mitsuwa's brief the soup stock at Tatsunoya is only made with pork bone and water. I do recall (of which I most likely watched on the telly) that there is one method of traditional tonkotsu broth making where nothing is done to the rapid boiling of pork bones and water (not even skimming off the scum which is typically good stock making 101) for a day and then boiling the reduction another round with a second batch of bones and added water for another day that produces an amazingly deep, smooth and rich tonkotsu broth. Don't quote me on this, and it has nothing to do with how Tatsunoya may or may not be concocting their broth. But whatever method Tatsunoya does use, gosh darn it, this was one of the most delicious Tonkotsu ramen I've had.(!) 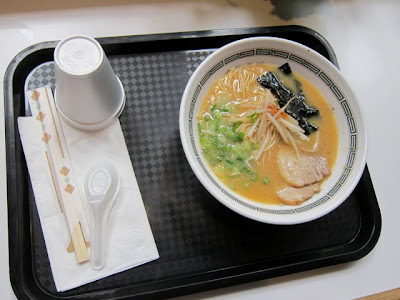 Definitely not the heaviest I've tried but I'd imagine this would be categorized as on the kotteri rich side. A sip revealed a much more viscous soup, simultaneously rich and mellow. It wasn't oily or fatty as it was really happen'n in the collagen arena. To me it was the concentrated essence of what made me a fan of Tonkotsu taken to another hearty yet not heavy level. 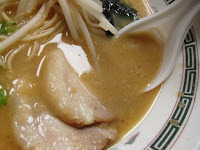 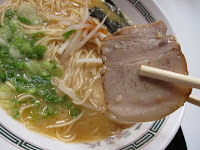 The darker color would make me think this was a tonkotsu/shoyu flavor but I couldn't confirm. If there were any Shoyu-dare it wasn't the main flavor or focus. I thought the chashu roast pork slices were marinated just right with very nice flavor. These were quite fatty but somehow easily palatable, at least for me. :) There were actually packs being sold for $5. I passed partly because I had a full day ahead of me before returning to any refrigeration. 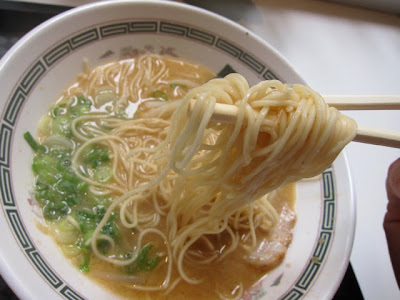 Similar to Ippudo's from last at Costa Mesa the true hakata style noodles were thin, white and borderline raw/crunchy - as far as I know how authentic hakata style goes and after a few private moments with the bowl I would agree indeed a great match to the rich tonkotsu broth. 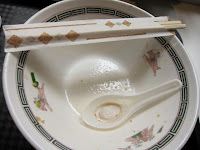 This was really good stuff. Please be back next year Tatsunoya! Actually more like.. Please create a branch here in Southern California for all of us to enjoy all the time (and at reasonable non-Mitsuwa Fair prices). ;)

I've been trigger shy with my camera lately but a few pics I did take of the rest. Manjyu were being grilled, gyozas fried; sushi pressed, and fish cakes galore. 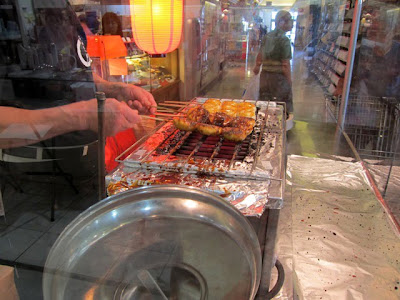 The Anago (sea eel) sushi looked great as did the Saba version. I hope these will be back next time too. *drool* 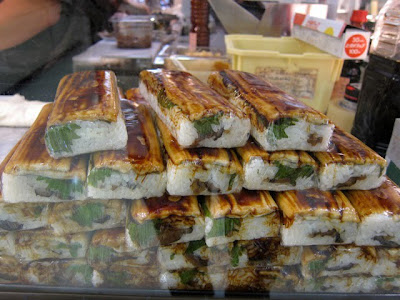 At the Osaka and Nagoya stall Ikayaki (Fried Squid Treat) was being highlighted. There were three ladder choices and I feel I should've went all out with the Egg, Negi and Soba but went with just the basic egg version. Was also being offered at $2.50 and one of the most affordable samples. I just loved the ultra thin wood veneer of a wrapper. It was then enclosed in a light paper box, then plastic bagged.. 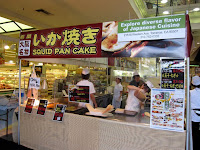 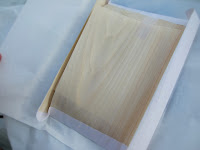 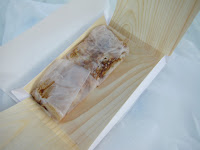 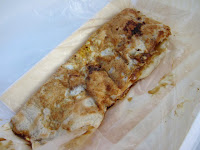 As if I just purchased some quality take out sushi or whatever, haha. The texture of the Ikayaki was interesting in a mochi like chewy crepe with egg, and squid fillings all with a controlled amount of okonomiyaki sauce. The basic version was good but I felt some of the negi chopped scallions would've been nice with as well. Dang I was so stuffed after though. 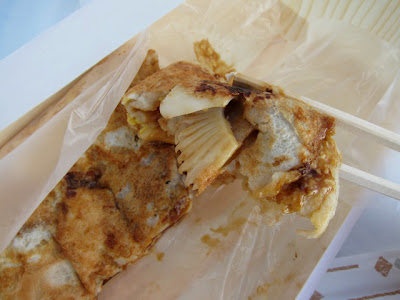 My day had taken a bit longer than expected and by the time I arrived at Mitsuwa Costa Mesa later past 7PM I had sort of given up on trying Ezofukuro's tsukemen but I was happy to find them still serving some up. 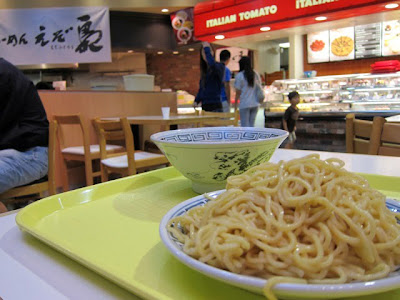 There was the Shiro (White) Shio Butter or the Aka (Red) Shio Butter version to choose, the red being essentially the same as the white except with addition of a small plate of spicy hot oil and flavored chili paste. I went with the Shiro white. Curious, this was actually my first tsukemen as the fad started much after my arrival in the U.S. but the concept would be very familiar to anyone who have tried a zaru soba. The noodles that are served on a separate plate are to be dipped in the (in this case hot) broth that is rather concentrated. 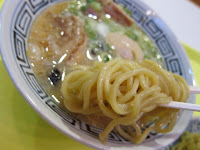 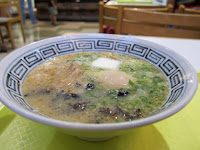 The noodles were thick and chewy fantastic. Great "koshi"! A good portion too. As far as I can tell the concentrated dipping broth here is tonkotsu based as well, quite potent in all aspects in fact rather salty, but nothing unlike how soba tsuyu would be.. The butter pretty much had melted completely by the time I had started and it definitely added to what was already rich. Visually the kikurage wood ear mushrooms, green onions, egg and very thick cut chashu would otherwise make you think this was a regular tonkotsu. The egg was hard boiled and here I'd have to say I would've preferred one with an underdone hanjyuku yolk. 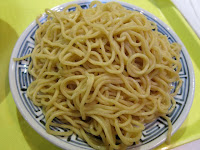 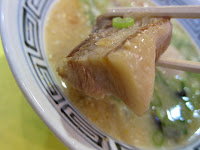 All in all my first tsukemen experience was a good one. Nothing mind shattering but definitely fun and tasty. After I was done with the noodles though I couldn't help but feel the majority of the unused dipping broth (I imagine so labored to create) was all going to waste.(!) Anyhow if they were back I'd probably try the spicy version next time. And I'd also have two bowls at Tatsunoya. :) 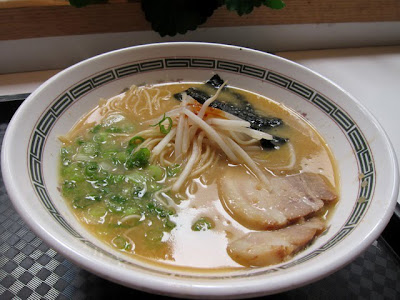 Everything looks so yummy. I really wanted to go to this, but I had just at Costa Mesa Mitsuwa the weekend before and I didn't think BF would be happy about making another trip.

Hi Kirbie, there'll always be another. :) I was surprised myself how soon this one came along since umaimono gurume was only six weeks back.

oh gosh, it is too hot for ramen here Dennis ;)