Thursday Ramblings - The Spam Popularity Theory And Other Stuff..

Man this weather has seriously put a dent in my appetite. First the heat and now the humidity (and today the muggy rain). At least we're getting to see a few cool cloud formations for a change though.. 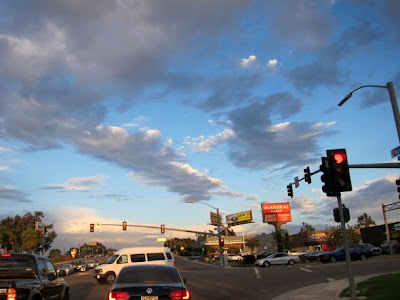 I don't know about the town in your state or country but in San Diego we don't get to see puffy Cumulus clouds often. Mostly only wispy ones, and that's if there are any clouds in the sky to begin with. Usually so dry here..

Went to Marukai for a change of pace last night. Came across a few things I found interesting and wanted to share. Well I've posted on my liking for Japanese Seaweed Paste in the past.. 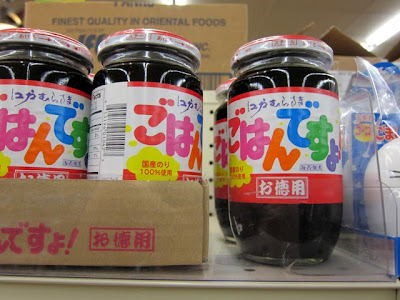 So while it was nice to know Gohandesuyo! comes in a Jumbo Jar (though I'm personally more a Bunsen Ara! fan..) this individual serving sized package I never knew of..(!) 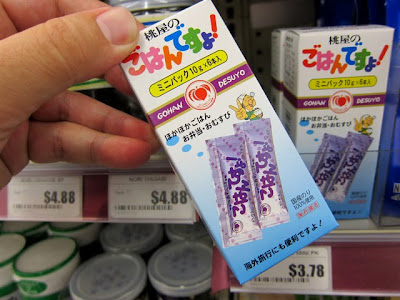 Probably for stuffing bento lunch boxes with. But also very cool to know I can keep a few packs in my shirt pocket for emergency purposes.

I also for the first time spotted Spam Singles being sold. Marukai tends to have much more Hawaiian favorited food and brand offerings than Nijiya or Mitsuwa. I still need to buy and try a few of the frozen boxed Zippy's Chili that they have.
Anyhow I think I first read about Spam Singles on someone's blog but I can't remember where. I hate not giving credit. Could've been Serious Eats. 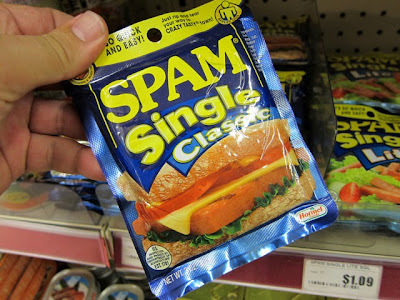 I need to one day do a dedicated tribute post on Spam, but curious if any of you have heard about the known key similarities of certain cultures that embrace the product. I think I learned about this on some Japanese food show quite a long while back, but the program said the following which made a lot of sense.. 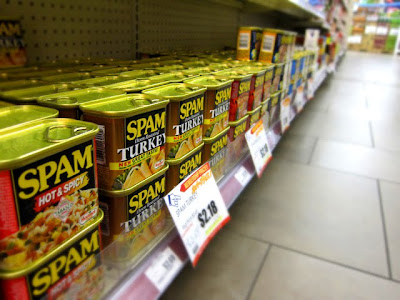 1) It is usually at a place where the culture of consuming Pork is already very popular..
1b) These places tend to have a geography, whether it be the lack of space (have dense forests) or topography where raising pigs for consumption is much more convenient than cows.
2) These places are usually subtropical hot and humid climates where the task of preserving meats were already difficult and thus canning has become popular.
3) Last but probably most influential.. A history of U.S. Military occupation.

So when these few factors align, you tend to end up with a culture that embraces Spam. Okinawa my hometown is one of them.

Boy the clouds were really neat this evening. 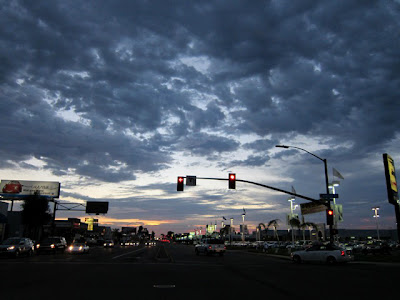 Oh, taking the opportunity here to share my impression of Nijiya's Tokusei Raayu - (Nijiya's special hot oil raayu - "edible" version) that I mentioned on a post in August. 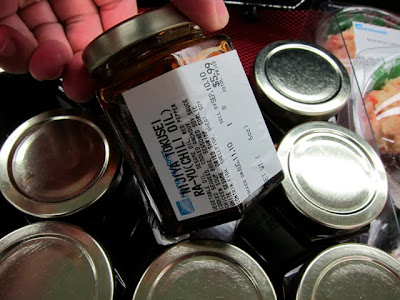 Well, below is a very unflattering photo of me having lunch in my car while waiting through the automated car wash cycle. One of those particularly hectic days, my Indian meal was even from the UTC food court nearby. 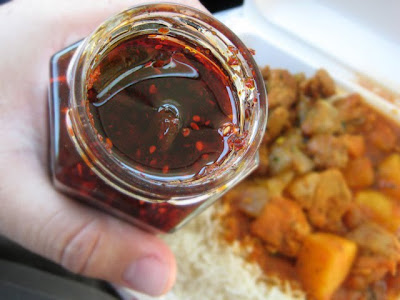 I've been carrying my bottle of raayu with me to places since I recently haven't been cooking much at home. ;) Anyhow the flavors of the hot oil itself was actually nice and fairly complex. A long list of ingredients that included dried chili peppers, garlic chips, several spices, some shellfish and anchovies even. But what I thought skewed the concoction too out in the Wa-Fu (or traditional Japanese cuisine) spectrum was the cooked tsukudani Konbu seaweed. While I personally find Konbu flavors pleasurable, the saturated simmered flavors of a tsukudani is quite characteristic and strong and can clash with food of non-Japanese flavor profiles. So I very unfortunately find the use of Nijiya's Raayu very limiting.

Meanwhile the original Ishigaki Raayu goes with pretty much anything. Nijiya actually carries another brand, I think it was Momoya. When I'm done with this bottle I might try it. But I think that's going to take a little while...
Posted by Dennis K. at 8:34 PM

I love how they call it "edible" raayu, so the one that is just raayu isn't edible?? :)

I keep a Spam single in my desk drawer for emergency situations. I like knowing it's there 'just in case.'

I can't wait for you dedicated Spam post. It is a subject very close to my heart... er... gut.

Hi K&S, that was my translation but it's kind of the only translation I can think of.. I know what they're trying to say is that it's a lot chunkier and substantial but yeah, in the end all raayu is consumable haha.

Hi Darlene that's actually a REALLY great idea.. :) I've been craving some kind of protein with all the instant noodles I've been consuming during work break.
BTW, were you guys having 'dinner' outside of Nijiya a few days back? I'd swear this guy looked like Horn..(!)

Funny, I kept taking pictures of the sky yesterday, too! But they're all still on my camera. I wasn't in a Photoshopping kind of mood last night. The spam & cultures thing is totally spot on!

Wow, did you take those pics of the sky while driving? I saw a rainbow while driving home yesterday evening and tried to take pics..which was both dangerous to myself and those around me. And I never did get a pic of the rainbow.

Hi Mary, yeah it was fun and I even got to take a few water puddles, and the sky reflected in the water puddles.. :)

Hi Kirbie, I'm a pretty quick draw with my camera both in my car and during meals. But yeah, you shouldn't do anything you feel uncomfortable with.. I saw a small rainbow on the way to work in the morning yesterday, was really neat. :)

hi dennis, you should totally do a spam post! compare it with the wanna be spams, like armour's treet and whatever else is out there.

i once got a free spam single from my mom. she bought it at the commissary when it was still a new produced a few years ago. it didn't taste the same as from the can - it had none of that nice congealed gelatinous stuff in there.

have you tried the spam dogs yet? available at a costco near you.

Hi CC, haha, that might be too hardcore for me but does sound fun. :) Thanks for letting me know your take of the flavor of spam singles. I should start by buying only one.
I had a random thought that they should sell iPhones in packs like it or offer a protective sticker that looks like spam so your iPhone looks like a slice. They're so similar in shape, haha. It's those radiused corners! ;)
Anyway do you remember when a can of spam came with that key thingy and you had to crank it open?

i meant 'product' not produced.

c'mon, do it! do a spam post with the same loving attention to detail you do for your ramen posts! :)

that would be cool if they made spam slice skins for ipods or iphones.

spam dogs are all right - they don't quite taste the same but close enough. plus they cook pretty fast.