Retort Reports: A Mabo Curry And Another From MUJI. Izakaya Sakura Update

I'm not sure for how long but Bandai Namco Games has been collaborating with House Foods in promoting the Sony PS3 RPG game Tales of... series with a special edition Mabo Curry packaging. I think the meal comes up in side stories within the game (how clever) but anyway the boxes below were purchased beginning of the year and is from Tales of Graces F. I had this final second stash end of November which was another episode of consuming a pantry item edging uncomfortably close to its expiration date. Oo la laa. 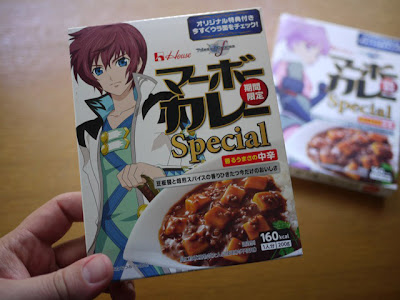 Love child of spicy Mapo Doufu and the familiar stewy Japanese Curry, I couldn't tell you who invented the Mabo Curry and when but House Foods has got it covered. With cubed soft tofu and conservative amount of ground meats, partially tasty Mabo and partially tasty Curry, sounds almost ingeniously clever and would've liked to have said a match made in heaven but somehow managed to not satisfy either of my cravings. This was pretty high in the junk food flavor-o-meter that I felt more in tune with taste palates of the ever evolving fast food tech-urbanite Akihabara culture and Japanese Gen-Z preteens maybe.(?) 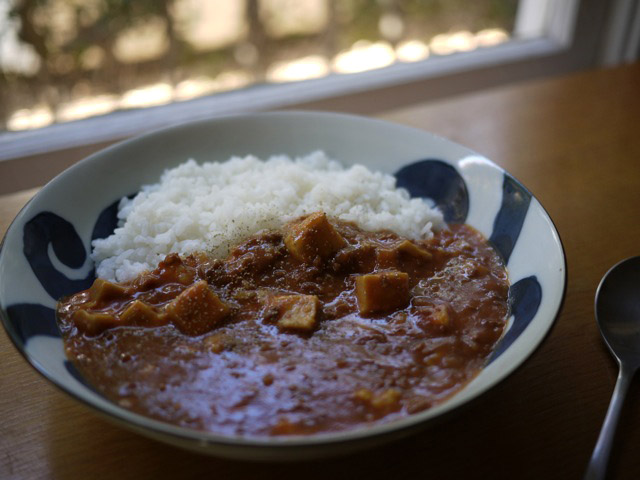 My second sampling, I knew the product was somewhat lacking in complexity so had sprinkled some Japanese Sansho pepper for a little woodsy lemony spice. (Sansho, a relative to the Szechuan pepper corn doesn't have the intense spicy numbing effect but more an aromatic that goes well with grilled unagi and Japanese Mabo). I definitely wouldn't go as far as considering the meal bad but can safely say a one time experiment with me. Next... 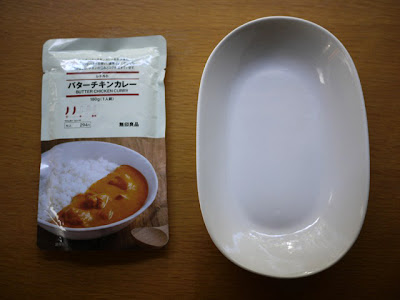 My first MUJI retort pouch curry I posted on their spicy Thai Green Curry. Since I had professed my love for all things MUJI there I'll refrain from doing so again here. This day I had the Butter Chicken Curry (aka murgh makhani) at a ticklish Two Muji Red Chili Pepper spice rating. According to an unofficial MUJI Curry popularity chart, said to be one of their best sellers. Switched plating plans last minute sorry, ha. Anyway this was a nice mellow Butter Chicken that wasn't too heavy on the butta and cream/yogurt but guilty enough. The subtle flavors of ginger, garlic and acidity from sweet tomato puree offset things well with also the leaner but tender chicken breast pieces complementing. 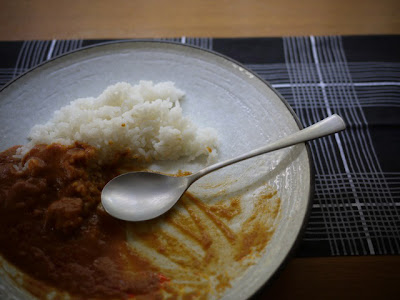 As Kirk of Mmm-Yoso had mentioned in this post, Izakaya Sakura has been closed since the Hooka lounge next door had a small fire mishap and caused some smoke damage to neighboring shops. As a long time regular it's been strange seeing Sakura closed as I often walk over to rent Japanese television programs couple doors down. Unbeknownst to many they were a 365-day, year round operation open for lunch and dinner on all holidays including Thanksgiving, Christmas and even New Years Day. I got the impression they won't be operating any time in the immediate future (probably at least to early next year) since it seems they've taken the opportunity to do some interior renovating. Great for them. 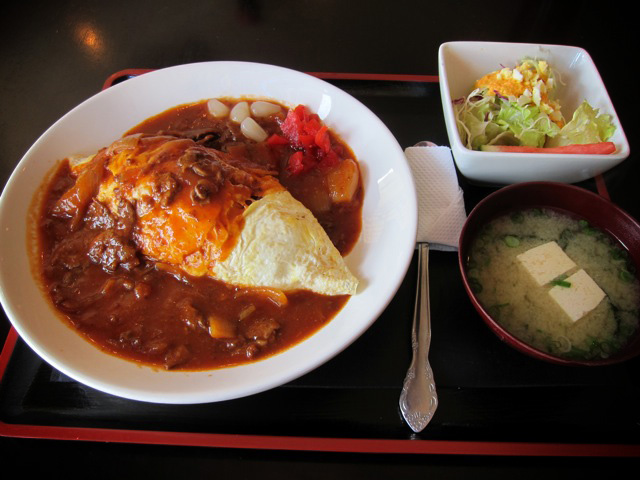 These days when in the area have been getting my Japanese fix mostly at trusty (Wa Dining) Okan while I still have a slew of lunches documented mid year at their sister restaurant Oton (that I've been meaning to share for a while). Haven't had the chance to revisit Hinotez since my last longer opening month post but did notice an advert in one of the free Japanese publications that refills of rice and miso soup were now free during breakfast.(!) Must go, but I've even been back to Chopstix (both locations) after recently making personal amends as well. Despite a few meal disappointments in the past at Tajima, I still feel they're a decent stand by while it's also been too long since I visited Ramen Yakyudori for no real valid reason except for being busy blogging other lunch spots. Can't forget about Sushi Yaro (former Sammy Sushi) too with many more to list here but thanks to Cathy, of team Mmm-Yoso, I even found a new Japanese restaurant in the La Mesa area - Shizuoka that I'm looking forward in posting on in the near future. Love these cozy mom and pop places! 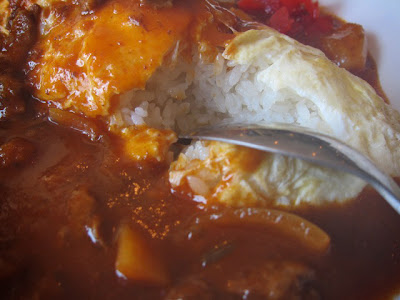 When I get a more firm date on when Sakura may be back operating I'd be sure to report.

mabo curry sounds delicious! I'll have to keep an eye out for that one.

Hi Kat! I found it sounding better than it was actual, but maybe you'll run into a better version. Let me know! :)

Hi Dennis - I heard mauybe before the New Year for Sakura, but it sure does look like they're still doing a bunch of work!

Hi Kirk! I agree that timing seems a bit ambitious with what I've seen too. But you never know with these guys, ha.

hi dennis - that is a cool plate for the curry dishes!

looking forward to your future posts!

haha, oton has the cool toilet!

Hi CC! Some are from the Daiso $1.99 store and others from the Japanese dishware place in Mitsuwa Market (Utsuwa-no-Yakata). They're closing btw and have all their stuff on sale now. My recent plate with the blue swirls I purchased there.