While Pixar's take on CG Food was interesting in its getting close to real ways, I've always been inspired by the renditions of Food in older Japanese animations. Done so simplistic yet still awesomely hunger inducing.

My most memorable though were the foods seen in Haha o Tazunete Sanzenri (3000 Leagues in Search of Mother).
Never knew the full plot until reading its Wiki article but the animation was strangely entertaining to watch poor Marco go through his journey often hungry and broke.. (I wish I were joking!)

I remember meals made from scrappings in back alleys.. Aw..

And simple meals eaten on trains..

The story was probably bearable because it would always involve generous people giving Marco a helping hand..

Back to the topic of rendition of foods, these of Soup and Stew are most iconic for me.. Yumm.

Reminds me of this Potato Leek Soup ($4.95) I had at Shakespeare Pub one afternoon.. 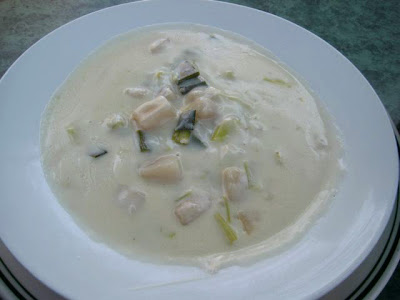 So Creamy and Tasty.. 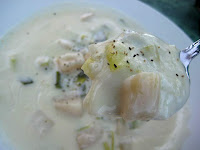 Shakespeare Pub & Grille, 3701 India St, San Diego, CA, 92103
All images from the animation are from Japanese blogger Hoshinon btw where he managed to archive EVERY scene shot of 3000-LISOM that Involved Food In Any Way. AMAZING. I almost peed my pants when I found this. He even recreated a few dishes from the animation. WOW.

So while browsing through Hoshinon's amazing archive I started to think..

Was Marco in fact really a Foodie with No Reservations using the excuse of finding his mother to travel and have good eats??

Like these lamb chops.. "*munch munch*, hmm grilled perfectly with a nice balance of gameyness and herbs.. What do you think Amedeo?"

I'm just kidding of course. Although eating bite-sized lamb chops in a pomme frite like conical newspaper wrapping sounds amazingly cool, I certainly believe it doesn't take much to enjoy a simple meal on a bench, especially when you're traveling.

This day for Marco was a small Loaf of Bread, a strip of Beef Jerky and Dried Berries. Not too different than what I have on some of my low budget road trips, haha.

I'm so inspired I seriously want to hit the road again, I almost don't care where! But I haven't had time, not to mention being broke (maybe not Marco broke but still..).