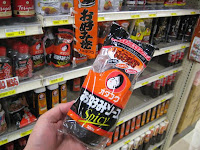 [A Spicy flavored Okonomiyaki Sauce I found browsing through Mitsuwa Market the other day..]

I always thought it would be fun to map out all these while learning something in the process and so with a huge help from a friend (an expert cook and professional researcher) A.S. residing in Japan where 90% of this post's written content had come from, I have made a loose visual representation. 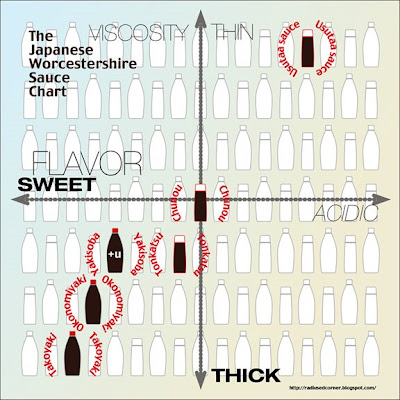 "Loose" as in stylized maps on a lunch mat, not to be taken too literally.. But to begin, the biggest discovery for me was that the variants I listed in the introduction all derived from the base Usutaa Sauce (Japanese Worcestershire Sauce), often simply called sauce (ソース) where a very technical (and boring) definition established by Japan's Ministry of Agriculture, Forestry and Fisheries can be downloaded here as a PDF for anyone interested.

While the intended uses for most are easy enough to understand by their names, the gist here was that there are three types mainly differentiated by viscosity.

To be honest this was a bit too technical for my interest but friend A.S. also had generously translated some information from Wiki Japan as well where the variation of sauces were better described. I added to this some of my own comments.

Wiki Japan explains the Usutaa Sauce (ウスターソース) as a Japanese arrangement of the British Worcestershire Sauce invented sometime after WW2. It is quite different from the original where it does not include the use of anchovies and is completely vegetarian. Only pureed fruits and vegetables, salt, sugar and spices (and sometime starches) are used. I generally find Japanese Usutaa Sauce much less acidic and a tad more sweet than actual Worcestershire. The variances were explained as such:

Usutaa Sauce [ウスターソース]:しっかりした味でさらりとした辛口がとくちょうです: Strong flavor but watery in consistency. - I personally love using this on Kakiage Tempura but uses are not specific. A nice alternative when suffering Soy Sauce fatigue, especially with Westernized Yoshoku dishes.

Chunou Sauce [中濃ソース]: ピリッとした味と甘くソフトな味の両方を持っています: Spicy as well as sweet but overall milder with a medium consistency. - General table use and is sometimes used as a flavor enhancer in certain cooking (often Japanese Curry for one).

Tonkatsu Sauce [濃厚(とんかつ)ソース]: フルーティでトロリとして甘くソフトな風味を持ちます: A lot more fruity flavored, thicker and sweeter. - One of the many self explanatory "Designer Sauces." I have a bottle of the Bull-Dog brand in my fridge at all times.

Yakisoba Sauce [焼きそばソース]: 日本人好みに、より旨味を強くしたソースです: Has a stronger Umami flavor for Japanese tastes.. - The explanation a bit vague but even yet thicker and sweeter than Tonkatsu Sauce. A small thing I noticed is that the sauce packets included in Instant Yakisoba tend to be much sweeter than the bottled stuff which is intended to be grilled with sweet vegetables.

Okonomiyaki Sauce [お好みソース]: トロリとしており、すっぱさと、しょっぱさがおさえられています: Quite thick, not so acidic or salty. - Obviously designed for Okonomiyaki, I find it fairly sweet but well suited for its application where Tonkatsu Sauce would be a bit too acidic for the use.

Takoyaki Sauce [たこ焼ソース]: 甘くトロリとした風味のソースです: Sweet and thick. - Probably the sweetest of all but I personally find it extremely close and hard to distinguish from Okonomiyaki Sauce.

Flavors will slightly differ from one sauce manufacturer to another like anything else but my friend A.S. also mentioned that preferences vary from Kantou vs. Kansai (Eastern vs. Western) parts of Japan so all this should only be taken as a point of reference.

Another website describing the different sauces from the Japanese Sauce Industry here. (Sorry, only in Japanese.) And some links to Japanese Sauce manufacturer's websites.
Bull-Dog - Ikari - Kagome - Otafuku 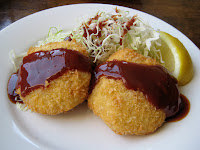 I love your graph illustrating the differences between various types of Japanese sauces. Yeah, Japanese are very into texture and rheology of their foods. I work with a food ingredients (food hydrocolloids) company locally and our Japanese customers are extremely into the nuances of various thickening systems.

Hi Ronnie, thanks for the compliment! Most of the grunt work was done by my friend and I really just got to execute the fun part.. :)
I recently was reminded of the "Doro Sauce" (literally translates to "Mud Sauce") found around the Kansai area so maybe I'll update it one of these days..

Thank you for the very helpful chart. Very handy when buying groceries and presented with a bewildering variety of sauces.

i grew up eating these sauces and life would not be the same without them. recently, i began an adventure of making my own versions from scratch; this is how i bumped into your post. i could not resist commenting about the 5star-ish-ness of what you have done here. i have never ever ever ever seen a better explanation of the nuances of each sauce. i have nothing but big love over here for your effort and chart. respect~