I may have randomly mentioned my love for MOS Burger here and there but for some additional context of what I've been up to you can read my first MOS Burger Re-Creation Project Update here. (The latest updates for this project can always be viewed by clicking on my MOS Burger Tag. Update 2.5 here.)

In a nutshell I'm a big fan of MOS Burger, a Japanese fast food burger chain.. but more specifically their burger with the same name and I've been trying to re-create it (so far without much success) here in San Diego. 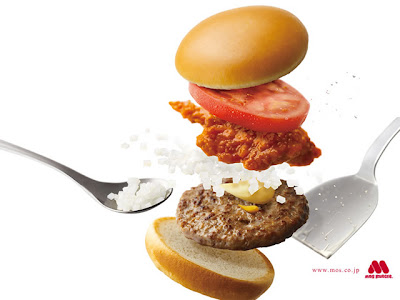 There are a few things that make a MOS Burger a MOS Burger but the biggest element by far would be MOS' so called "Meat Sauce".. And imitating this uniquely adapted stewed tomato based Japanese sauce concoction of a burger condiment has been a very big hurdle.

As you can see trying to describe it in words is even difficult.. Google researching I found it often mistakenly referred to as the Chili Sauce (Not), Salsa (Nope), Tomato Sauce (Over simplified), and Marinara (No Italian herbs here).. It's neither Bolognese or a Sloppy Joe either. Secret Sauce I also hear sometimes which isn't bad (though I must clarify that this is nothing like the "secret sauce" on an In-N-Out or Big Mac where we all know it's Thousand Island Sandwich Spread) but again as far as MOS is concerned it is simply their Meat Sauce.

My "few tricks up my sleeve" I mentioned ending the last update were to try using these as a kakushi aji (hidden flavor ingredients).. 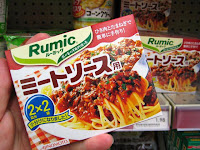 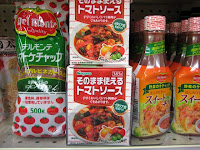 Again failed miserably. The several tries with stewed diced tomatoes with sauteed onions were all too sweet and resembled too much something you'd put on pasta. Maybe wasn't that big of a surprise. Still one version with a teeny bit of Miso was interesting enough to want to try again with another recipe in the future.

A leap for me that took things in another direction (in a good way) was in trying out this Japanese beef stew rue. 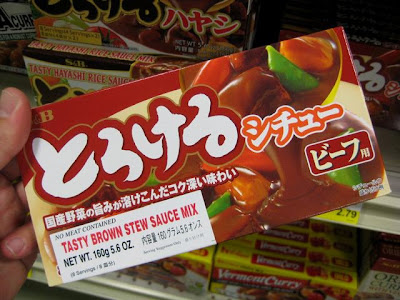 Used it (half the suggested amount for a true stew) again in some diced stewed tomatoes (I used beefsteak tomatoes which are less sweet) and onions (this time white).. 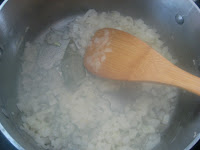 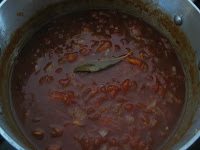 The final product was reduced much more than shown. I tried it with and without a little additional Demi Glace concentrate. Poured it on an earlier purchased In-N-Out with a teeny bit of Kewpie Mayo.. (Sorry no photos.) I felt I was much closer than the earlier versions influenced by Japanese tomato sauce mix but I can't really say it was a success either. Lessening the stew concentrate would be a good start but somehow my gut (haha) says I'd be better off starting again from a clean sheet.

Getting warmer though and I still have a few more ideas I'd like to try. At this point it's a challenge than anything else. One great thing I did manage to discover was that my theory of using In-N-Out's ordered with onions (raw), without sauce but with mustard, actually did turn out to be very decent donor burgers for a MOS! So I did make some progress.

Not to confuse things but MOS Burger is launching their special Tobikiri Burgers on March 24th with a Tomato Demi Sauce. Huh.. Well at least I feel I have a good head start on that one. :)
Posted by Dennis K. at 1:31 PM

I love MOS Burger!! Now if you could only recreate the awesome breakfast sandwich from Loteria...

Hi Clare! Well I haven't been successful just yet.. In fact I'm far from it! Wish MOS sold the sauce in jars.. Never had Lotteria's breakfast sandwich but now I'm very curious.. :)

Ooo...is there going to be another update?

Hi Edjusted, can't promise when but definitely! I found a lot of false alarms out there that claim they did but wasn't really. I guess it all depends how close the person wants to get to an actual re-creation. Wow this long reply to your comment is making me realize my total geekness. haha

The sauce is Miso based, and there is a slight anise flavor in there.

When they say 'meatsauce', what they really mean is a sauce for meat, not a sauce made from meat. I'd work with Miso and see what you can come up with, but inasmuch as the comments I've found here are six years old, you very well might not be paying attention here any longer.

Hey Hans, thanks for dropping by and taking the time to comment!
In MOS founder Sakurada's autobiography he mentions using a small amount of Miso as a hidden ingredient, but to call the sauce miso based is probably an overkill. Did you know his original inspiration was L.A.'s Tommy Burger? At least visually there's a striking resemblance, but as you know the similarity abruptly ends there. He knew the heavy chili sauce used in a Tommy's would be too heavy for Japanese tastes so he developed his own MOS meat sauce (and hence the use of some Miso as well). Also MOS' website lists both pork and beef in it. But yeah, texturally it's hardly noticeable I agree.