Inspired by a post on Delicious Coma I picked up some very fresh eggs at the Hillcrest Farmers Market today. I really need to fix that flat on my bicycle. I now realize how lucky I was with parking during my visit last weekend.

Anyway so I've been watching YouTube vids on making Dashimaki Tamago for several weeks now and I felt ready to finally break in my new copper dashimaki pan. I was as ready as an in theory dashimaki tamago expert can get I guess. :)

The Dashimaki Tamago (dashi = broth, maki = rolled) also sometimes referred to as Atsuyaki Tamago (atsu = thick, yaki = cooked). I found a range of recipes for it but I settled on something close to this one by Koichiro Hata on Otamajisyaku's YT channel. (Calls for 8 Eggs, 3/4 Cup Dashi (cold), 1/3 Teaspn Salt, 1 Tablespn Low Sodium Soy Sauce, 2 Teaspn Mirin.)

I think every Japanese household has their own recipe variance. I personally like a rather strong dashi presence in mine while the preferred sweetness also seems to differ person to person. Fyi, I shied away from recipes that used a lot of soy sauce because it darkens the color of the Tamago and the visual person that I am, I enjoy ones that are bright yellow. 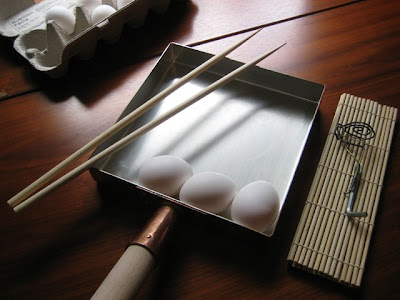 I'm such a geek with my kitchen tools. See the beautiful contoured sharp ends on the chopsticks? Sanded it myself. N-E-R-D... haha. And what's that weird looking tool jerry-rigged to an IKEA hex wrench on the makisu you ask? 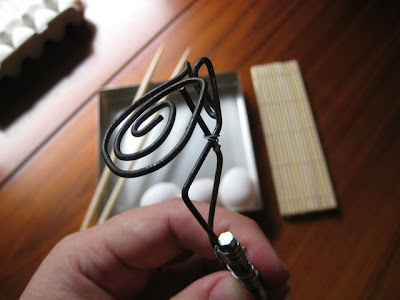 It's a tamago branding iron I made with a wire coat hanger. Hard to tell now but it's a Spiral-Egg-Maki-Chickie.. I was limited to the designs I can create with the thickness of the wire and my needle nose pliers. There's not much to it but I'll do a proper how-to post on this eventually. 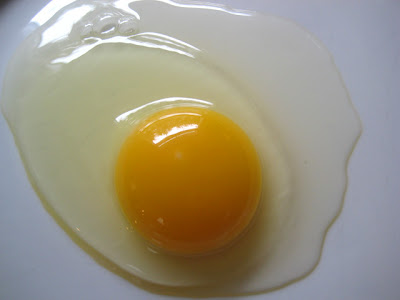 These eggs were huge so I only used six. I also added a tablespoon or so of sugar. All recipes warn to not beat the eggs too far. Unlike when making a French Omelet the goal here isn't to whip and incorporate air. So some marbling with specks of whites are ok. The photo to the right is with the dashi and other ingredients included (added after the eggs were beaten). 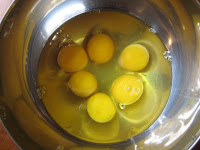 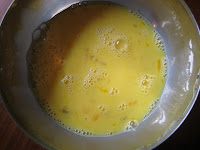 No photos of the actual cooking process because that would've been way too much stress for me. But also in the future I plan to join the club of How-To Dashimaki Tamago Videos on YouTube. Just not any time soon because I was horrible! Could've been the new unseasoned pan.. yeah that's it. 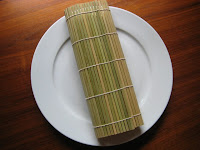 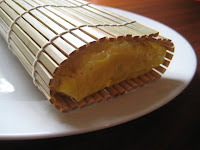 Luckily the trick in letting it set while wrapped in the makisu had helped a lot. (And I mean A LOT.) It pretty much had only one smooth area in letting me try out my tamago branding iron. 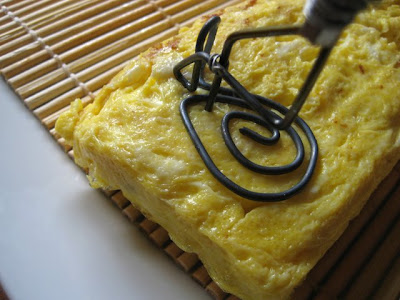 So after heating it red hot and pressing lightly and evenly (and quickly, my second attempt stuck to the eggs!), I end up with this.. 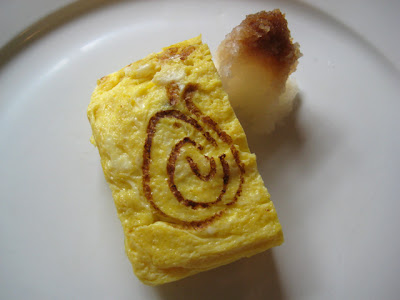 Overall I was pretty happy with how it turned out. Most important it tasted good. Very fluffy too. Next time I'll be adding even more sugar though and the dashi broth I made with Katsuobushi flakes and Konbu will be much more potent. 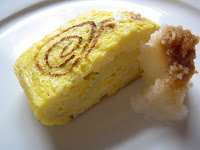 And when I try one with Unagi inside it would be fun to come up with another design for it. :)

Here is a link to one of my favorite dashimaki tamago vids on YouTube. You can fast-forward the beginning minute or so of driving through a very rural part of Japan.. Looks as though he works out of a shipping container. Love it!

Very cool - I didn't even know that I wanted to brand omelets until now!

What is the other item on the plate?

Thanks Mike, I've since embedded a favorite vid of mine if you like to check it out. Now that's a tamago branding iron!
Dashimaki Tamago is usually served with grated daikon radish which is what you see (with a drizzle of soy sauce). I actually get daikon at Henry's because they sell them in convenient smaller cut pieces.

Wow, I can't believe you made your own branding iron! Pretty cool.

Hi Kirbie, thanks. I guess on rare occasions something constructive actually can come out of a few beers and boredom, haha.

Very impressive. The cooking and the branding iron. Although, I have to admit not liking tamago b/c it's too sweet for me.

I tried a Hokkaido-style ramen-ya today. The noodles were quite excellent, firm and chewy. The broths lacked complexity, but were good for a small mom and pop place.

Hi WC, thanks! I still want to drive up some day to try those sheng jian bao. I purchased and tried some at 99 Ranch that were frozen but the skin was gummy. Where was this ramenya? I love the Sapporo style with a slab of butter! mmm.

Hey Dennis,
I just went back again today to try the Sapporo miso with butter, corn, and lots of bean sprouts. It was so good. I could definitely smell and taste the butter. It's at Aji Man in San Gabriel. Next time you want to take a road trip, let me know and I'll meet up with you here and take you for some pan-fried Shanghai buns too.

Hi WC, sounds like a great plan! You're also making me hungry and I just had dinner..