The 2009 San Diego Comic-con is approaching this month. I'll probably end up going for at least a day but honestly my interest (in this particular venue) had peaked sometime in early 2000. I think it has a lot to do with the crazy lines that seem to get even crazier every year. But I do reminisce the days when my out of town friends would come spend a night or two at my humble abode where we would have a few beers and plan the week's schedule. I'm actually curious what the general public's interest and the turn out will be this time around.

Anyway, so I thought I'd do another Anime Inspired Food post for the occasion. You can click the Anime label to read a few others I have done in the past.

Food in Gundam actually combines three of my food fascination subcategories. Food scenes in Anime, Space Food, and Food Packaging. The one in the original Gundam series that left the biggest impression on me was when protagonist Gundam pilot, gearhead, and eventual discovered Newtype - Amuro Ray explains to his fellow mates why the Gundam system is superior to other Mobile Suits (can you tell I'm totally geeking out right now?? haha). He goes on to draw a diagram of RX-78-2's advanced learning and evolving mechanism in a flat plate of mashed potatoes.

After a long search (that baffled even my most Gundam Otaku friends), it turned out this was from episode number 4. 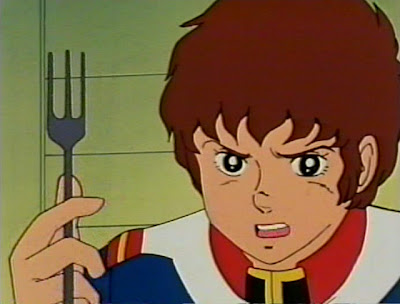 Here is Amuro with his three-pronged space fork ready for some major schooling in Gundam's awesomeness. 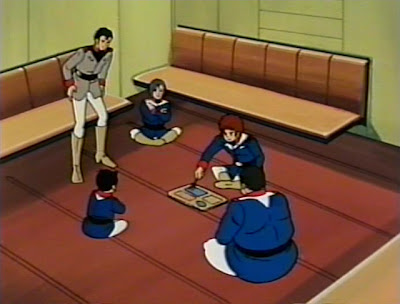 He goes on to explain the inner workings in his uber nerdy fervor. And below the image that I was so excited to finally find after all these years!! 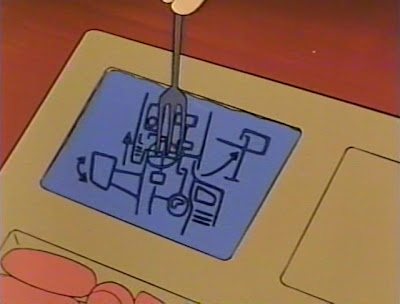 I'd swear I had those side of space baby carrots at the SD Chicken Pie Shop recently. 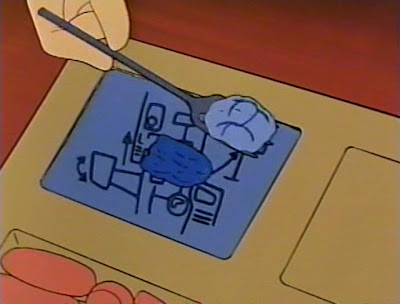 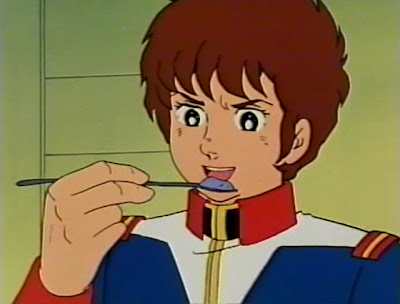 After Amuro is satisfied with the attention he has received, he proceeds to scoop a bite from his art creation like a monk would a sand mandala. "Mmm, nutritional good eats this blue space paste.."

As to echo the celebration of our 4th of July, Bandai has been making a full size (180-Meter tall) Gundam in Odaiba (Japan's Statue of Liberty??) to celebrate its 30th Anniversary. I cannot explain how so amazingly crazy jealous I am at the moment. I would make a promise to god that I will start jogging everyday at 5:30AM if I can run past this marvel every morning wearing my NB's. I will be the happiest person in the world universe. And be fit.

By now there are quite many videos on YouTube but I found this one that seems to have been taken from a cell especially cool for its Lomo like low-tech effect..

If this fancies you make sure you check out the project's official YouTube channel Voidwild. They've been uploading semi-weekly updates with tons of neat informational background.
Below a nice clip at night showing the mist and lighting effects very well..

The birds flying in the background in this evening shot makes it especially neat..

And heck, it's probably the coolest in the morning still.. Dang, did I say I was jealous?!

And despite all this, no I'm not an Otaku, really.. But my friend who made this video a while back definitely is.

If you got the Gold Blend coffee and Char's Hyaku Shiki pun I congratulate.

Not full-scale but a clip of a large 7-Meter tall Z-Gundam here. This one of a Zaku awakening is spine chilling for me and another from the Bandai Museum. I'm glad to have found out that it has resurrected in a nearby city now though where a visit to its G Style Cafe would be a must for me next time I'm there. I'll have the blue mashed potatoes please.. :)

We're going to Odaiba at the end of this month - will it still be there???

Did I ever tell you how obsessed my husband is with Gundam?

He has already told me his plan is to stare at this statue for a full day.

Hi meemalee! I heard it is a temporary installation but it's not clear for how long. But I'm sure it will be there for your soon visit. So jealous!
That photo was awesome/classic! You seem to be a good sport about it which is great cause I know some guys that are closet Gundam fans, ha. ;)
Anyway, looking forward to your posts when you guys return from your trip!

what a cool post! we're going to the con this year...my project is getting someone to make my daughter's cosplay outfit - she wants Katara from Avatar the Last Airbender - the Battle Costume. As for me, no dressing up! I'm not that brave! Are you going all 4 days? we are only doing sunday.

Hi CC! I missed the last two years but I think I may go this year but not sure what day. Your daughter's costume sounds so cute!

I completely forgot about Comic-con. I've missed it the past 3 years. Doesn't look good for this year, either. Like you said, the lines and craziness may be a bit too much for me nowadays. :-)

hi dennis -
score! i found a lady at my gym who's a tailor - she will make the katara battle costume!!! yes, complete with arm coverings, gloves, and boot coverings (instead of buying boots, i will buy fake fur that she will fashion into coverings that will 'snap' over her legs on onto her shoes.

anyways, i've been going to the con since the late 90's (due to boyfriend, now husband) - it used to be really small and consisted only of geeky old simpsons-dungeon master type guys with their boxes of golden and silver age comics. now, the con has grown in both size and scope in terms of what they offer, from anime to gaming, to hollywood blockbusters (which i hate), independent comics, pop culture, and so on. it's kind of a double edged sword, but the con brings so much exposure for the companies that do go, especially the independents. plus it's really fun to see who dresses up. one year that was a hot black wonder woman and a female captain jack sparrow!

Hi Cabcooks, I remember you needed to stand in line whether you purchased tickets online or not. I heard they wouldn't send them because they were afraid of people counterfeiting tickets?? There's gotta be a better solution than that.

Hi CC! I agree about the double edge. I still really like the Comic-con once I'm there.
Awesome you found a seamstress for your daughter's costume! And she'd be ready early for Halloween. :)