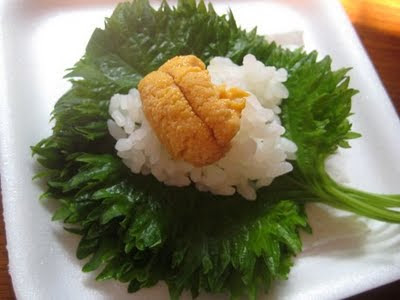 Some hot steamy rice and a stack of fresh Ooba leaves from Nijiya Market was all it took for me this day. 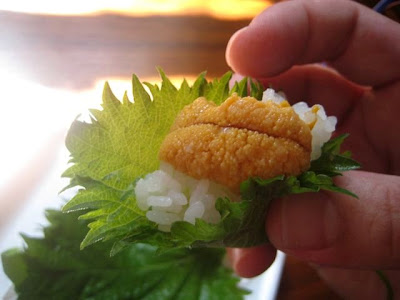 I personally call this method Sashimi Tacos but if you mention this to anyone they will most probably not know what you are talking about (though I did find this after googling). It was my first time to try with rice so maybe technically a Sushi Taco.. 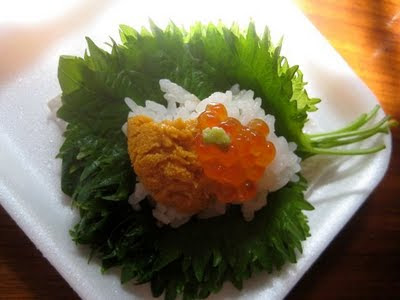 Or in this case a miniature bite-sized uni-ikura-don. If heaven were available in bite-sized experiences I was living it. 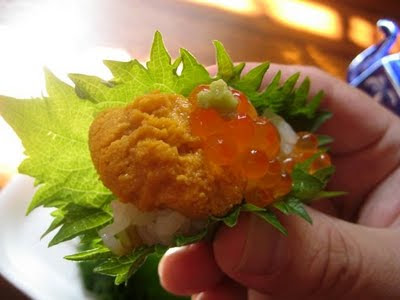 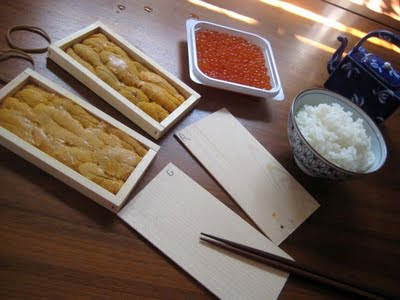 The Premium as expected was excellently fresh with a very nice hint of ocean breeze uni flavor, mildly sweet and good medium-firm texture. The individual morsels ranged in size and shape somewhat but not to the extent as my sampling from Nijiya a while back. 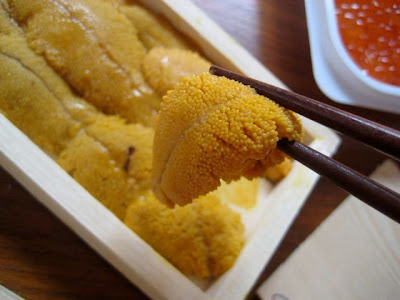 For 9-bucks this was definitely a bargain. Blessed with COP being only ten-minutes away from home, the only thing to prevent me from consuming it on a regular basis would be their $25 minimum purchase rule. 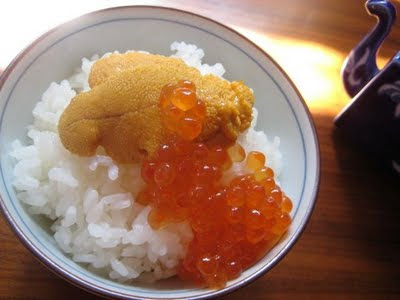 And then we have the baller Gold status.. The photo below reminds me of the jewelry box scene in Pretty Woman. "I don't want you to get too excited because it's only on loan.." :) 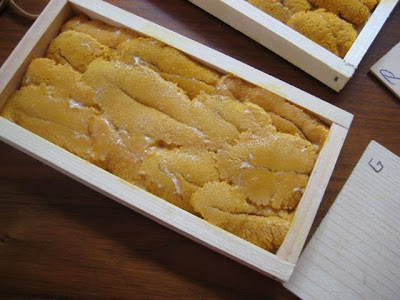 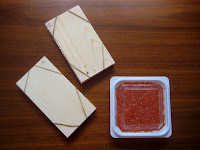 The simple rubber banded wooden lid did not snap shut on me as in the movie but I did truly love the no nonsense minimal packaging. Unfortunately though the tight box was not conducive to the uni's visual appearance. The plastic film that acts as a protective barrier touches the uni and results in a saran wrap effect. Otherwise the product itself was truly excellent. Large meaty uni that was firmer/denser and even sweeter than the already great Premium. It was pretty much the quality of uni I had at reputable sushi restaurants.

The frozen ikura was defrosted slowly in the fridge overnight as recommended. Compared to the fabulous uni, I've had better ikura but I don't mean that at all in an unkind way. It was very good and if served to me at a restaurant I would be happy. 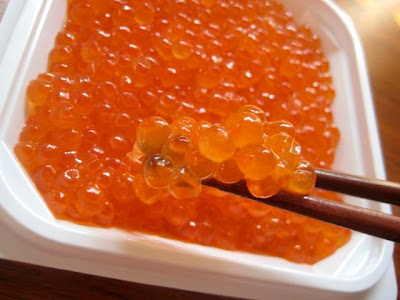 I've heard before that 99% of ikura sold here comes from Alaska and already in salt preserved form. I believe this was from PeterPan Seafoods. The amount of salt was light and just right for my taste. I thought doing my first soy sauce/sake marinade would be fun but concluded that the benefit of the extra flavor would probably be canceled out by the extra sodium. A sujiko being prepared into marinated ikura can be seen here on itasan18. 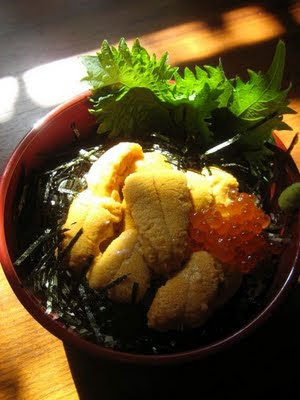 So all I can say is wow, what a treat this was.. And I managed not to OD on the stuff. As for my personal question of whether to go Premium or Gold.. for an occasional indulgent uni-don at home I would be more than happy with the Premium. For the extra splurge for an excellent Gunkan Maki that will leave your friends oohing and ahing at a home party?.. I'd say go Goooold! I dream of doing a palette of it and cut squares with a small putty knife like at Sukiyabashi Jiro as seen on Bourdain. (Check out the 4:04 mark!)

But then there's the live stuff which I haven't had the opportunity since my uncle knifed me up a tasting from the beach back home when I was very little. It's a rather blurry memory but one I cherish dearly. But the way I'm going I'm sure that's all about to change as well! Meanwhile I'll work on my uni-don presentation so it'll be as good as this one day. :)
Posted by Dennis K. at 6:31 PM

ohh, shiso. I love it so much. I've tried to grow some but it never seems to take off.

while I am not a fan of uni, my cousin swears by the uni-ikura combo :)

Hi Jenne, I know what you mean.. we used to have the purple leaved stuff grow wild back home but here I'm lucky if my basil plant stays alive for two weeks. But it's not like I ever had a green thumb either, ha.

Hi K&S, I agree with your cousin! The lightly salty rich roe really complements the creamy sweet uni in flavor and texture. I think they visually look good together too.. :)

Definitely! I was inspired by your last live uni post a few months back.. I'm sure I'll be asking for pointers as to opening them when I do!

Mmm uni. I love how you compared the two grades! I'm going to have to pay Catalina Products a visit.

I love the simplicity of your uni preparation. Sushi tacos! What a great descriptor.

Awesome clip from Sukiyabashi Jiro. I watched the whole thing, but the section at 4:04 where he's cutting the uni is, in a word, dreamy.

Hi Kirbie, I got the sense people who go there regularly know exactly what they want since there really wasn't much to see in the browsing sense. It was definitely neat to experience once though and I got to wear a hairnet! Haha.

I love C.O.P my wife picked up some Uni and Maguro last time, I was not aware they had two grades. Thanks for the excellent post.

Hi MA, thanks! I guess there's always higher grades still (Platinum?). I recently had an Ota-san omakase and the uni was seriously the size of a spark plug!! :)