I never visited Teriyaki Cowboy, the predecessor to Izakaya Masa.. I also never visited Masa when I think they were open for lunch in the early days. 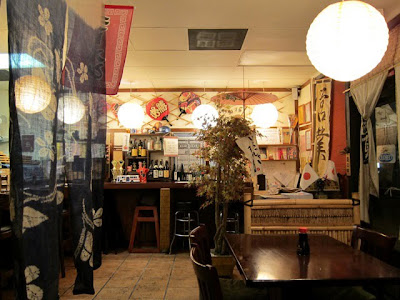 They've been dinner only for some time but I noticed a sign up during my most recent visit that mentioned they were going to start serving lunch come May. Only on the weekends but for me a very neat thing. 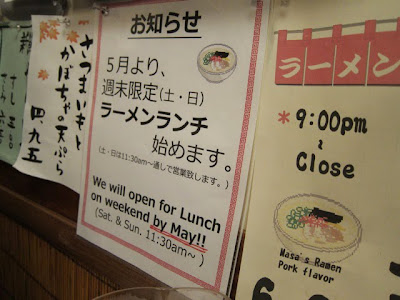 Decided to give them a visit today. I sort of written on Izakaya Masa in the past but only indirectly in part of strange odds and ends type of posts, like my Dinner Shapes and Kushi Katsu Pictogram. Dinner Shapes?.. Pictograms??.... Oh the good ol' experimental days.. haha. I feel like starting more of those again though. 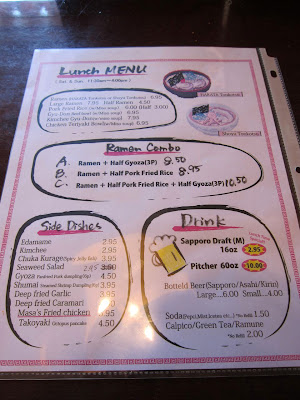 Anyhow, the lunch menu was a condensed single page focusing on their tonkotsu ramen, a few donburi rice bowls and sides.
I went for the Hakata tonkotsu ramen Combo-C ($10.50) that included half order of pork fried rice (hanchan) and small order of Japanese gyozas (3-pcs). 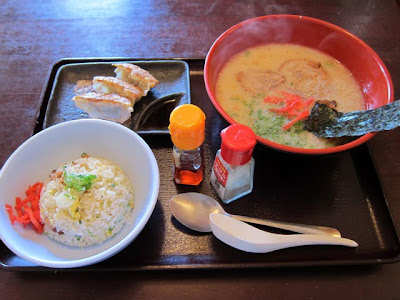 The portion which was supposedly the larger (you can get a half order if you want) seemed a bit on the smaller side. Two thinner pork chashu slices, green onions, benishoga pickled red ginger, and a slice of nori seaweed. Oh, and fried garlic chips. 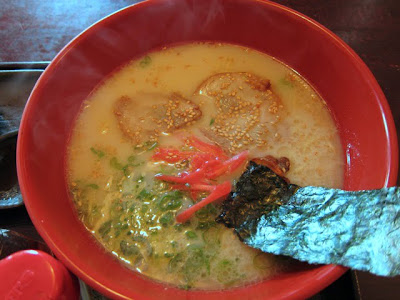 The creamy pork bone based soup was good enough with a nice amount of oils glistening on the surface but I thought suspiciously had a pre-packaged flavor. The same for the straight(er) noodles. A decent chew but nothing to write home about, especially far from the tokusei-teuchi (special handmade) that I think the waitress once claimed it to be. Well I guess I'll have to take their word for it.. 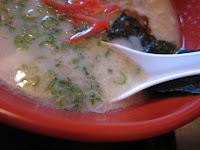 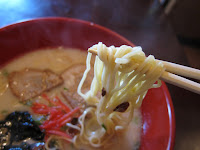 I have to say I really enjoyed the fried rice a lot. Simple but well executed. 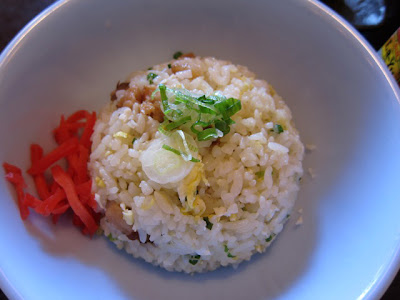 The individual rice grains fluffy and flavorful. Also had the perfect amount of that glossy coating of rendered pork lard from the fatty pork chashu. The pork fat imparts a wonderful natural umami sweetness that I miss in a lot of "healthier" versions.. 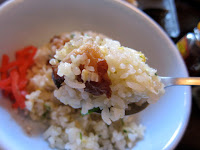 The Japanese gyoza actually were also noticeably well executed. One side with fantastic crispiness with a nice light aroma of こうばしい roasty sesame oil. The filling was a little interesting, reminded me more of a pork Shumai filling with a high ratio of soft kneaded pork and much less of veggies. 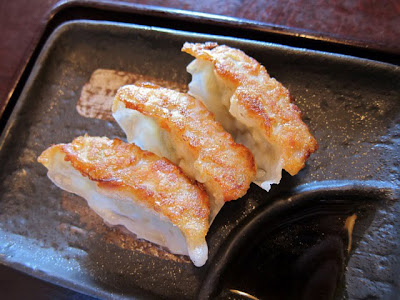 Still far from a 'Wow' Japanese gyoza but definitely one of the better in San Diego IMHO. 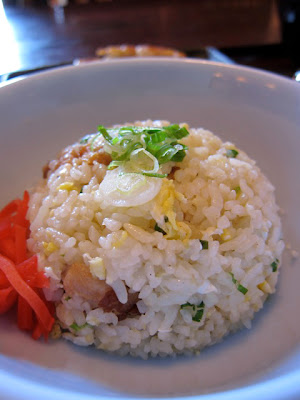 Overall it was a very satisfying lunch meal and I felt not a bad value, though I wished the ramen had a bit more volume. The tonkotsu ramen is not quite the amazing bowl I've been hearing about but a solidly serviceable one. A dedicated post on Masa is way long overdue but looking back I think their strong point is that they seem to consistently produce very serviceable dishes that are satisfying especially after a few chilled Sapporos on draft. ;) A great atmosphere here too. Really glad this place is in the neck of my woods..

I was originally planning to end my post here tonight but I thought it would be a good time to share the bowl of Pho I had at the new Pho Fifth Avenue in Hillcrest a few weeks ago. I visited right after opening from a tip from one of Kirk's Saturday Stuff post. 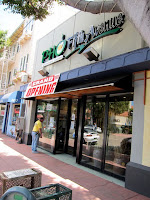 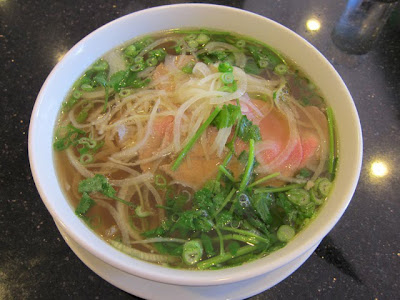 Also a half order of their Cha Gio. Was wrapped with the more commonly seen Chinese egg roll skin. If you ever come across the more authentic translucent rice paper wrapped version the crunch has a little more chew (and maybe lightly sweet). I like them both ways. 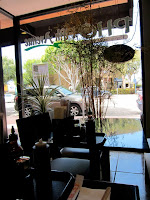 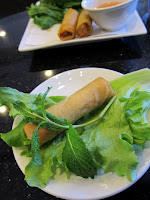 Interior is the nicest decorated of any Pho joint I've been to with sage colored walls, large vases and plants. Reminded me of a trendy modern Thai place. Anyway back to the Pho.. 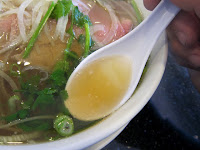 I'll be honest and was a bit skeptical but you know what, I thought the broth wasn't all that bad! A very decent beefiness in flavor with some light sweetness from I imagine the charred onions. I do personally prefer a much stronger ginger/anise herb presence in the soup though but again just my personal preference. No ngo gai sawtooth herb in the veggie platter but the bean sprouts and basil were fair in quantity and freshness. 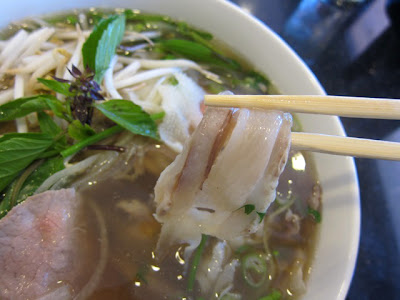 The cool thing about getting the dac biet (or house special) is you get to try all the meats. Everything was great (unlike my unfortunate experience at Pho Point Loma) and also generous. One of which was the tendon shown above that was impressively butter tender, the softest I've had in a long while.

My personal favorite Pho spot still remains Pho Lucky (Mira Mesa) but having one I enjoy so close that also has a full menu is quite exciting. Well I hope PFA stays consistent and keeps this up!

I'm so hungry now. Excuse me while I go and stuff my face... :op

Hi CAB! I've done that many a times myself reading about your meals you know.. :)