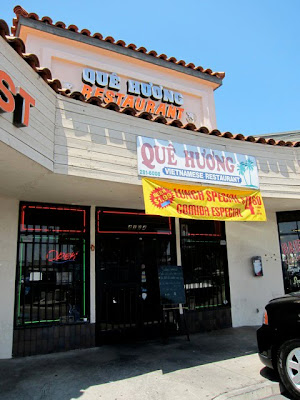 Kirk was nice enough to invite me for a wing tasting two weekends ago at Que Huong. QH has been a place I've been wanting to check out for a while and on top having a chance to try some tasty tebasaki wings again with none other than my original blog inspiree was something I wouldn't miss. But I also somehow had a hunch that I'd be having more than just wings the day.... ;) 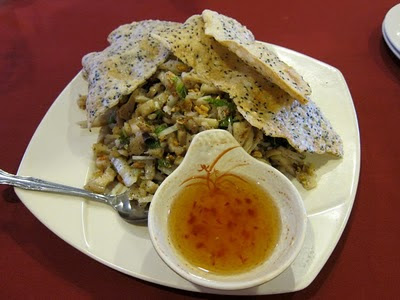 First up was Goi Mit Tron Tom Thit Xuc Banh Da (Pork and Shrimp Jack Fruit Salad with Sesame Rice Chips, $12.95). (Menu here.)
One day I'm gonna learn how to type the names correctly with the proper Vietnamese tonal hyphenation spellings... But anyway while I was excitedly geeked out enough that I'd be having a dish with the word TRON in it (he he), this salad was some seriously yummy stuff.(!) 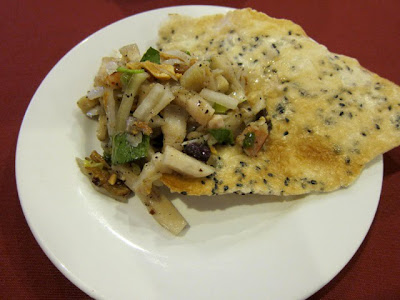 Was like a light stir-fry, but the veggie portion done in a flash so to still have a par crunch left in them. You would have it on the provided sesame chips and a drizzle of that nuoc mam cham. A really great starter that I'm sure I'd be ordering again one of these days. 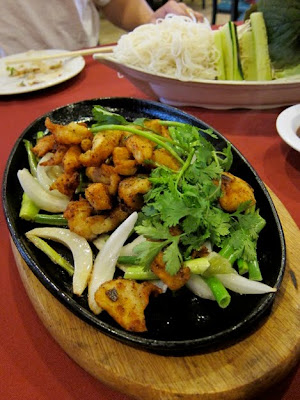 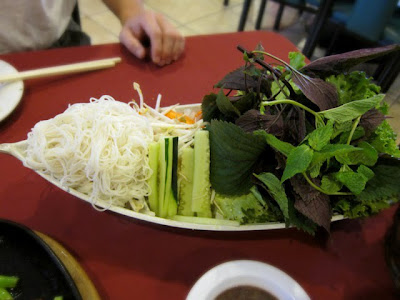 The amount of accompaniments were seriously out of control (in a good way that is). :) Kirk mentioned QH's version of the fish portion is much less oily than what he is used to seeing in Hanoi or elsewhere but they do serve it with the correct pungent fermented shrimp sauce. 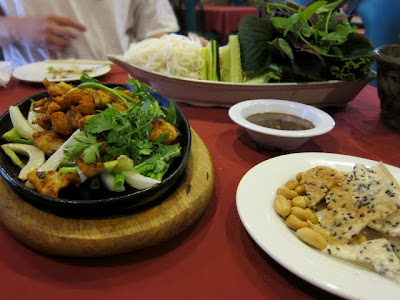 Basically you place a serving of the rice vermicelli into your bowl, tear up some fresh purple perilla leaves, pick up some of the turmeric seasoned fried fish and grilled onions and whatever else fancies you and have at it. All the contrasting combinations of fresh vs. grilled, protein vs. veggies and starch, herbal aromatics vs. umami flavors were nothing but wonderfully delicious. 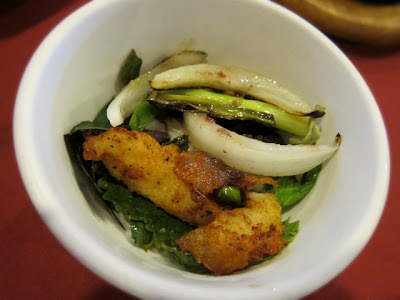 The fermented shrimp sauce turned out to be a bit too pungent and bitter for me but I used some of the sweeter nuoc mam cham from the previous Jack Fruit Salad which I hear is also sometimes served the way (though perhaps not as authentic). 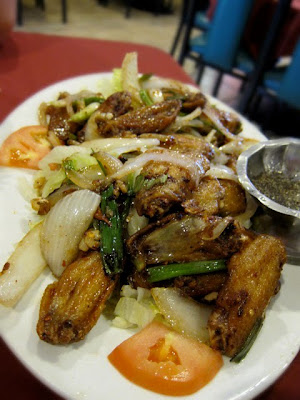 Finally the wings arrived. First off, I didn't know there could be so many varieties to choose from. You can get them flavored in Fish Sauce (Canh Ga Chien Nuom Mam), Plum Sauce (Canh Ga Xot Xi Muoi), Butter!? (Canh Ga Chien Bo), and Tamarind (Canh Ga Xot Me). We got a half-and-half plate of the fish sauce and tamarind flavor. Anyhow, I can't express how refreshing it was to see these instead of buffalo with ranch dressing for once, seriously.. Haha. 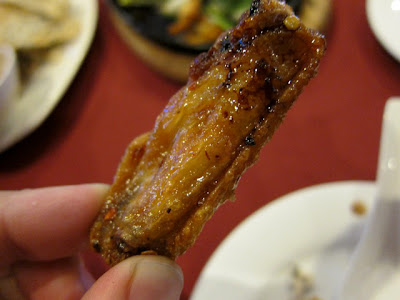 Wing number one was the tamarind variety because the side of plate was closest to me. These were the smaller wings but fried crispy lean outer, moist inner, with a nice sticky glaze that wasn't overly wet. So Good. I'm not a big football fan but I know what I'll be bringing to my next Superbowl Party.. 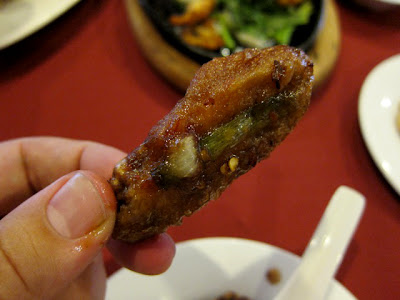 Wing number two, marinated in fish sauce. May sound odd at first but basically the sweet/salty/lightly pungent and mild heat flavors of the tasty nuoc mam cham wouldn't be too off. The wonderful stuff we dip our cha gio egg rolls into. Nothing fishy here (well maybe slightly) but some really tasty beer food Vietnamese style. :) But man, these were dangerously addictive! 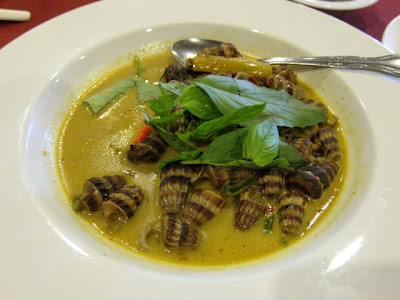 And as I thought lunch was almost over with some great catching up conversations we had, I guess the owner recognized Mr. K. from his previous visits and how he really enjoyed the snails here. So before you know it a plate of the Oc Xao La Me Hoac Xa Ot (or Seasoned escargot in coconut juice with Tamarind Leaves, $12.95) was out. 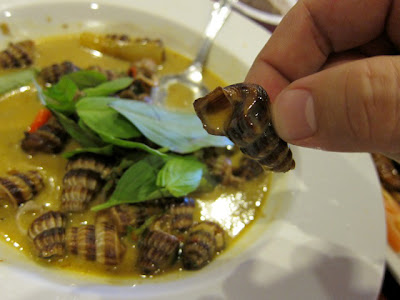 The snails are nipped at the ends to allow you to suck the meat right out. I've had French escargot but those were drowned in butter and garlic and parsley so I'd be lying if I said I wasn't a bit weary here. Definitely some props may be going to the flavorful coconut curry sauce but I'm happy to say I did enjoy these. 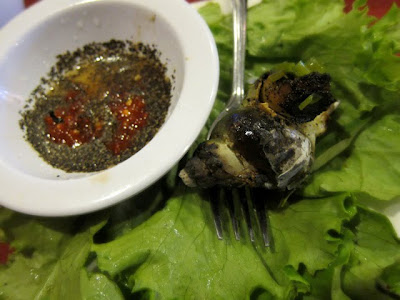 Mr. Owner of Que Huong also had some really fresh larger snails this day that he was so eager to share with us. Yay!? Kirk devoured his with ease in minutes. I had to study mine a bit first.. 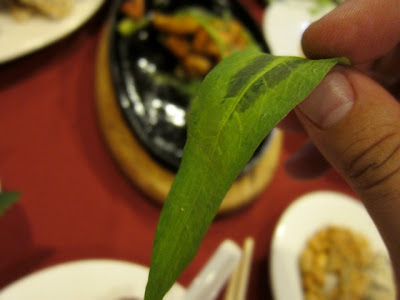 The Vietnamese Coriander garnish (if I remember correctly) was unlike anything I had before. It is nothing like Mexican Cilantro or even the chlorophyll-y Ngo Gai Culantro that I love having with my Pho. This herb has a very antiseptic, in fact somewhat soapy flavor as odd as it sounds. 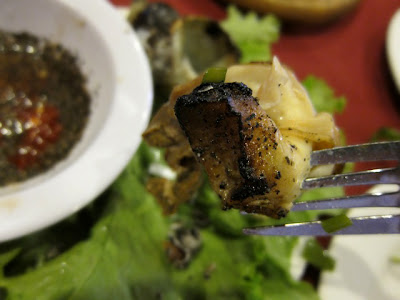 And the large flame grilled snails? The closest thing I could think of that I had were Japanese Sazae (Turban Shells) and was mostly visually at that. The fresh water larger snails are naturally much more earthy. Well I tried but I gave up after two bites where it was much too bitter for me. The front white meaty portion is supposedly sweeter and the intestinal rest bitter but I unfortunately could only taste the latter bitter the sad amateur snail eater that I was. I felt really bad for wasting this large snail (I think acquired all the way from Westminster) but I'm definitely going to make up for it and then some in the future with more Chicken Wings, Jack Fruit Salad, and that fish and herbs in a bowl at Que Huong.(!) 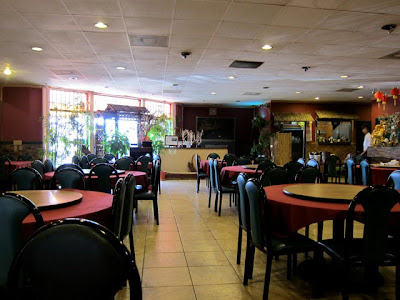 (Another) big thanks to Kirk for another great fun meal experience. Definitely a well needed break for me in my otherwise usual ramen and burgers routine life, haha. :)

Canine Cologne had done a post on QH as well which can be found here and another here.
Kirk's mmm-yoso posts here, here, and here.

I'll take my wings however I can get them! Sounds like you guys had a great time.

Ooh, I love wings. The flavor options sound delicious. So much food. Was all this just for the two of you??
Btw, I disabled the word verification feature on comments on my blog. I'm hoping that solves the commenting issues some people have with my blog. Let me know if you still have problems.

hi dennis, i love this place! we went here 3 times in one month. the owner is also pretty cool, except for this anime haired guy who didn't let me and my friends sit in the big round table even though no one else was in the restaurant.

we really liked the tamarind wings as well as the fish sauce wings.

the pork/shrimp jackfruit salad is really good too. i liked it so much that i ended up figuring out how to make it (courtesy of wandering chopsticks blog). except instead of pork, i used shredded rotisserie chicken breast. faster/easier.

the vietnamese coriander (rau ram) does have an interesting flavor. that also tastes good in vietnamese chicken salad.

been wanting to go to que huong again. last time i went was for my bday and my friends didn't want to try the crocodile. :(

Hey Dennis - I'm glad you enjoyed your meal... well except for the snails! ;o) We need to get you trained to enjoy the Mam Tom.....
I had a great time, so let's do this again, ok?

Hi CAB, I know what you mean! My last two buffalo wing experiences were not that great but I definitely had good ones in the past. But have you ever had any that wer so pungent that a wiff of it hurt your nostrils?? ;)

Hi Kirbie! Yeah I've been having problems posting comments again on your blog. Hope you don't get any spam now. I get them once in a while despite my word verification. Anyhow yeah all that was for two people! We had a lot of leftovers which I got to take home. :)

Hi CC! I've since read your posts, always good fun reading. :) I think the dragon ball Z guy was there that day but he was cool.
Vietnamese chicken salad?! Man I'm really missing out. We should all definitely get together soon! :)

Hi Kirk! Thanks again. And I did enjoy the escargot in coconut sauce, just not the larger snail. Always good to stretch your envelope right? I hope I labeled everything correctly by the way, please feel free to correct me. And yes let's do this again, but please let me pay next time! Or at least go dutch... :)

I love all kinds of snails. :)

"Tron" just means "mixed" since it's a salad/stir-fry that you scoop with the rice paper.

Thanks for the Tron clarification WC! I could be a real geek sometimes haha... :)

hi dennis - ooh, you linked my posts! how nice!

Hi CC, I'm completely swamped again for another few weeks but we should definitely get together it be here or Sab-E-Lee or wherever... :) I'll be in touch.