The crazy devil's bastard child incarnation of a thing we are looking at here my friends is a quarter chicken, leg portion - Hot, from Prince's Hot Chicken Shack in Nashville, TN. 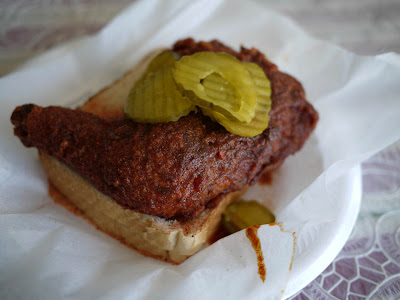 Hot Chicken is a Nashville specialty which until my friend Kirk of Mmm-yoso had mentioned to me before my trip I honestly didn't know about. Thanks Kirk! Um, I think.. haha. But I found that even some Nashvillers wouldn't know about it. Must be one of those underground fight club kinda deal where people who know, know..? Bolton's is another famous joint amongst Hot Chicken fans. 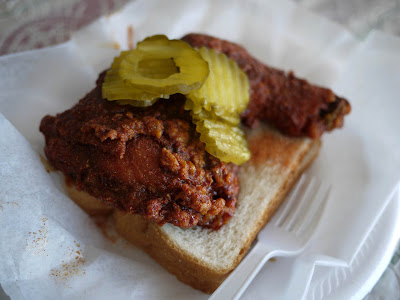 Dude. This thing was H'HOT. The kind that makes my facial muscles involuntarily twitch and skin tingle tangle. Painful Hot. Yet I have to agree it was somehow strangely addicting. This I would give a lot of credit to the fact that at its core Prince's Hot Chicken is a very well executed Southern Fried Chicken. The secret spice blend and recipe evilly works its charm coupled to this medium thick, darker crunchy skin crust and perfectly done juicy tender interior.

The spice blend at first seemed one dimensional because of the sheer heat, but working my way a little I found it definitely complex. The iced tea never went down so quickly and a cooling side of coleslaw would've been perfect company. I'd be lying if I said I finished the entire quarter chicken but I had most of the meats (which the spices were still well penetrated) and whatever I could of the polarizing delicious chicken skin from hell. If I could only tolerate the heat I probably would've eaten the juice soaked pieces of bread as well. I was so frazzled I forgot to document the tweener shots of my meal which I usually take. 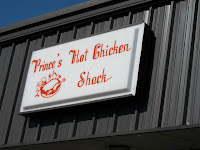 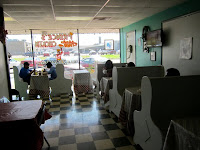 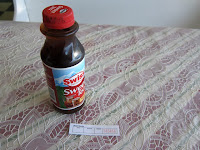 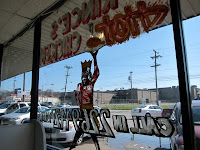 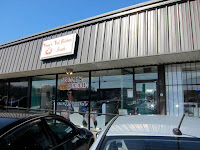 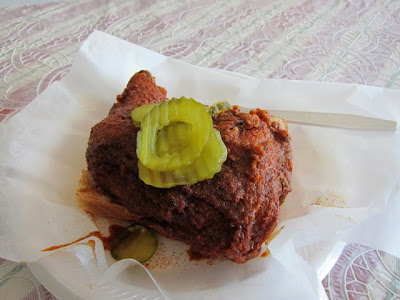 And the crazy thing is it's not even the hottest that they offer. For those so inclined there is available a Very Hot. Yikes. 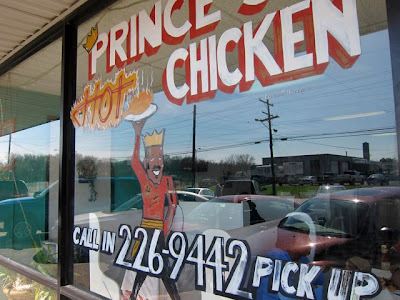 If I'm ever back I'll be ordering the mild. It'd be a delicious fried chicken that's just hot enough.
A quick write up on Prince's on Roadfood.com here. And this video I found on Youtube pretty much sums it up.

cool video! that lady is a hoot!

and those guys...ha ha...i was thinking when watching the video, what happens the next day, and the video totally addressed that! "it comes out like a missile" and the guy in the red shirt saying, 'as soon as you get off the toilet, you want more!"

that chicken must be totally addicting for people to subject themselves to that!

the skin alone looks hot! omg, i want some now!!!!

Man, that chicken looks great! I'm glad you had a chance to check out Prince's.... I wouldn't know how the locals wouldn't know about the place???

Hi CC, haha yeah got lucky finding the video. The skin was the hottest part though the heat penetrated way into the chicken itself..

Hi Kirk, I meant to say I was surprised to find some Nashvillers not know about hot chicken. I sometimes forget not everyone is into food like we are, haha. But yeah as painful as it was it was fun to try and thanks for the rec! :)

Looks like your doing a great job of hitting up the local specialties - first meat and three and now hot chicken.

I've got a picture of Prince's that is almost identical to your last one. We didn't go hotter than medium, though - which was still super hot.

Thanks Mike, it's always fun. Prince's was my last stop right before heading back to the airport for the return flight. So I was in a 'what the heck' mode and just went for the hot. I had to stop by a grocery after to get some whole milk though! It helped some.

It is the capsaicin in the spices that they are addicted to, and that chemical is known to have an opiod effect on the brain. I definitley have a buffalo wing addiction. Do they offer ranch dressing? if they did it would be heaven, if not I would sneak my own in.