I remembered Canine Cologne commenting on how horrible Yoshinoya was as we passed one by during the recent SD South Bay Crawl. I generally agreed with her but mentioned how the place was actually good in Japan and that I'd do a post on Gyu-don (Gyūdon, Gyuudon) eventually. 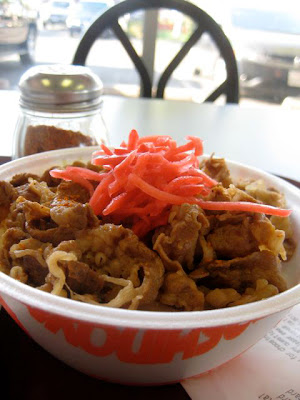 I think what took me the longest today was hunting down these Yoshinoya U.S.A. pics.. Anyhow so while I would openly admit patronizing Yoshinoya during college days, and I'd even admit dropping in within the last couple years as you see here, to my defense in hypocrisy most of the visits were fueled by a longing of having the real stuff coupled with what I call general AVNR (Amnesia of the Vow to Never Return).

Judging by many youtube clips I've seen of Yoshinoya in other Asian countries outside of Japan, at least visually it seemed they were producing a very close rendition along with serving them in the proper Yoshi-Gyu colorful ceramic donburi bowls. Here in North America though they've chosen a different path which I never completely embraced even for my part-American taste buds. Once strayed from the basic beef bowl the menu is vastly different. 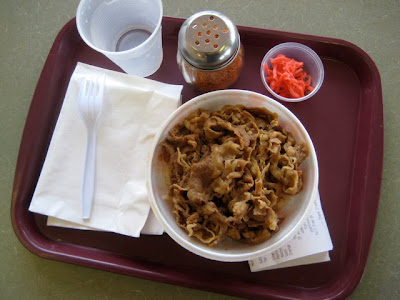 For me the quantity and quality of the beef topping isn't so much the problem as much as how it is seasoned which is quite salty and one-dimensional in flavor. If driven to a corner I would manage to have this umami ridden fine shredded beef bara-niku (layered rib meat) stewed with onions only on a fluffy bed of hakumai out of my own rice cooker. It's because the worst crime here has been the overly-wet-waterlogged-unappetizing rice. Pick up your order and yes the meal weighs as heavy as a brick. Filling, but is it good eats? 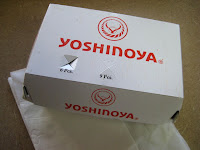 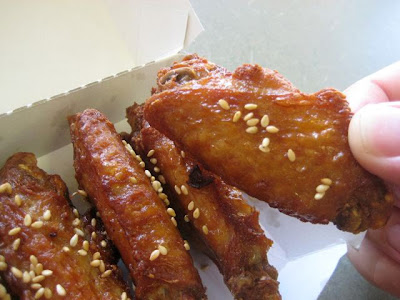 Ok, I like their chicken wings which you won't find in Japan. Fried crispy with a light nutty sesame oil finish. But the potstickers and foamy instant miso soup, it would be a far stretch to say it was nice to know ya. Enough of my silly rantling, onto the good stuff. 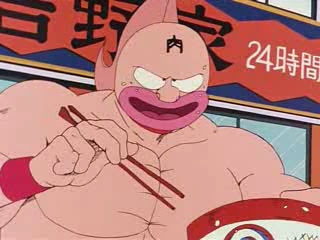 The almighty Gyu-don, one of the many go-to pillars of everyday sustenance for the Japanese workforce and starving students. In its natural habitat the meal delivered as delicious as they are cheap and fast. This famous "Umai, Yasui, Hayai" motto belongs to none other than Yoshinoya Japan (U.S. wiki article). Matsuya is another popular Gyu-don shop with the attractive characteristic of serving a free bowl of miso soup with, while Sukiya is another famous one (U.S. wiki article) which I personally never tried. These are only the few mega-chains. 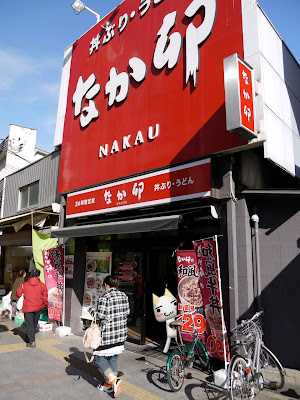 Despite walking past countless I didn't get the chance to revisit Yoshinoya or Matsuya my last visit but I did try out Nakau for the first. I wasn't at all familiar with Nakau but they may be known more for their variety of very traditional Japanese Teishoku sets to udon/soba and curries. My biggest impression (and envy) was that most were 24-hrs. 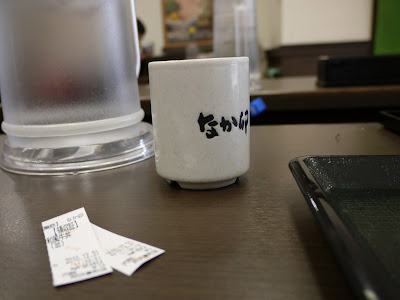 Below Nakau's Gyu-don nami (standard size) with Kodawari Tamago (select raw egg). The gyu-don was about three bucks (results from a price war started by Yoshinoya Japan in early 2000) and the egg 60-yen (~$0.60). 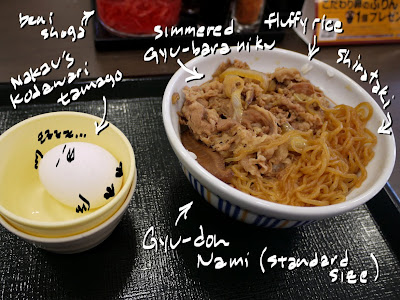 "Oomori" can be asked for when wanting a large portion in most Japanese eateries but for a beef bowl, asking for "Nami" is a quick way of ensuring you getting the standard or normal size while "Tokudai" is for an XX Large. Other Gyu-don ordering specific slang lingoes are:

Anyhow the simmer here also comes with some Shirataki konjac yam noodles which are often found. The raw egg is also a common topping, sometimes stirred ahead but I roll with cracking it right on top. Plus it makes a good visual, haha. The intense orange color of yolks from Japanese eggs always impressed me where I'm not sure if it's the feed that does it or genetics. But you gotta also love those fresh thick glaring whites. 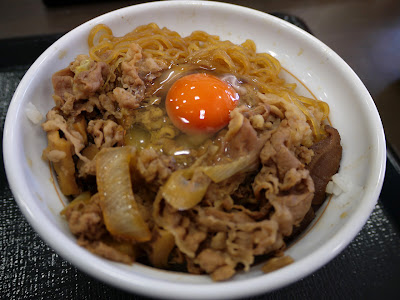 The flavor was fairly textbook but delicious. A light sweet simmer of soy sauce, sake, mirin and nice dashi where the U.S. Yoshinoya variant severely lacks this in nuance. 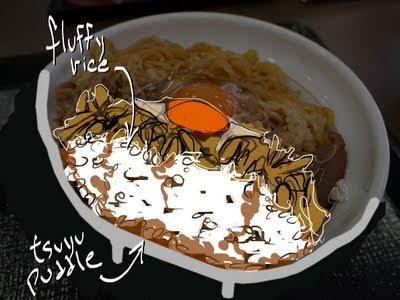 The rice on the top half of the bowl would still be light and fluffy with some tsuyu broth collecting a small puddle on the bottom. I enjoy this contrast rather than the mentioned tsuyu-daku option. 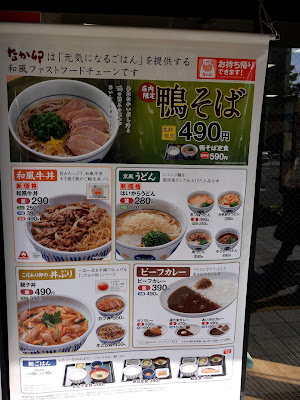 Here in San Diego choices are unfortunately limited. Izakaya Sakura has a very decent Sukiyaki-don Teishoku lunch set that runs in the $9 range which comes with soup and pickles. Recently discovered now comes topped with a nice runny egg as well. 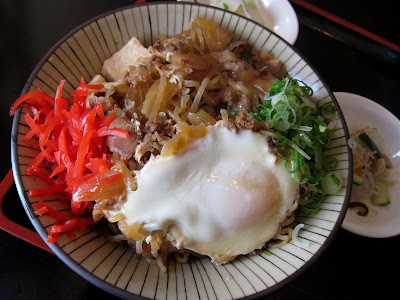 Otherwise options are the premade refrigerated in the bento section of your Japanese markets which generally run in the five-dollar range. You can also get frozen pouches of just the topping in the freezer section but if I remember right the flavors were more salty. At least you can have it with rice that you made.

It's far too much trouble for me but you can also always make it from scratch. Good luck!
Posted by Dennis K. at 11:31 AM

Nice post! One of my favorites, so easy to make. When i make, I make a lot of sauce cause I love it with rice. The one from Izakaya Sakura looks great.

had a malware alert when I clicked to read your post...weird, it was the first time that ever popped up.

Thanks Nate! So seems you're a tsuyu daku-daku person... ;)

Hi Kat! Oh no, but I doubt it's related to the sight. Hopefully not anyway.

cool post - i never knew about these types of dishes.

Hi CC! Thanks.. I also just added another photo to the post. Anyway yeah as much as I tried to like them... But I want to feel they can turn around if they wanted to.

Yes...I am a tsuyu daku-daku person!

Nice! Actually on some days I am too! :)

My 1st time visiting ur post, very nice! I just started to love Japanese and Korean food about a few years back, and my faves are gyuu don and jigoku ramen... since I'm muslim, it's a bit hard to find halal Japanese or Korean food that taste authentic though... ur posts do make me crave! Thanks for the great visuals!