A longer post today that had been simmering for about a month now. Not quite up for writing any history behind the somewhat elusive background of Japanese style Hamburg Steak. But it's often compared to American Salisbury Steak and of course the namesake German (Frikadellen). In fact the topic of how Japan got to start regularly consuming Beef is an interesting story in itself, stemming from dynamically changing ideals taken place during the Meiji era which went as far as modifying the country's diet.

But anyway, for this post wanted to share three dishes I made with the same Hamburg mixture. With my preferred 7:3 aibiki blend ratio of ground beef to pork for Hambaagu, I usually end up with at least a pound and a half to two of the prepared pate. To make it easier on myself I sometimes go ahead and do a 1:1. But either way that's a lot of Hamburg Steaks which could get tiring through the week as delicious as they are. 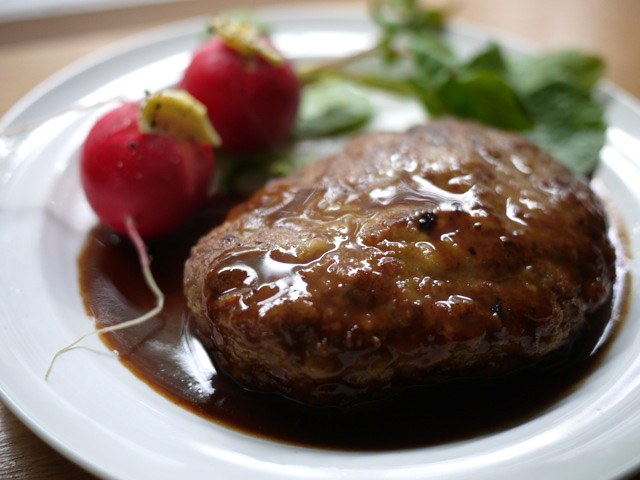 Above was my first tasting of this particular batch that I didn't really plan on making a photo out of. I learned the trick of turning fresh radishes into a quick tasty side from an old Swiss French roommate during college. Funny how random things like these can stick. Simply make crisscross notches then dab on room temperature butter, sprinkle coarse ground black pepper. 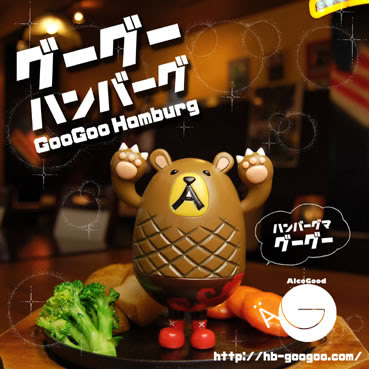 Also sharing my recent random fascination of a hambaagu bear mascot that goes by Goo Goo. The flaming tights and red boots are because he's supposedly a Pro Wrestling fan. I shall have this vinyl figure one day in my collection, mwa, ha, ha. 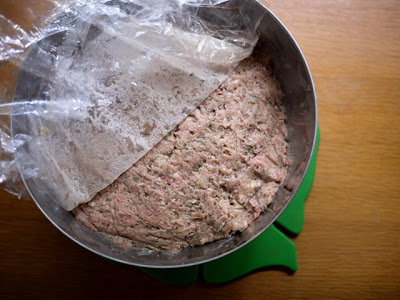 As with Japanese Curries that I also occasionally make, I can't say my Japanese Hamburg are ever the same twice either. I vary between sauteed onions vs. finely minced raw onions (strained of liquids). Spices kept simple with only nutmeg vs. it and a blend I come up with on the fly. A dash of red wine vs. sake. May also include all, some, or none of a tablespoon of soy sauce, Japanese Worcestershire and ketchup. What I do always include is an egg and handful of panko bread crumbs hydrated with about equal amount of milk.

Some aromatic vegetables that work great included are finely minced fresh parsley and celery. Though if I do celery, I would make sure to near pulverize it so you don't end up having that distinctive crunch. Everything is then mixed like there's no tomorrow until it reaches a smooth consistency. This is to ensure a soft fluffy texture that Japanese Hamburg's are all about. 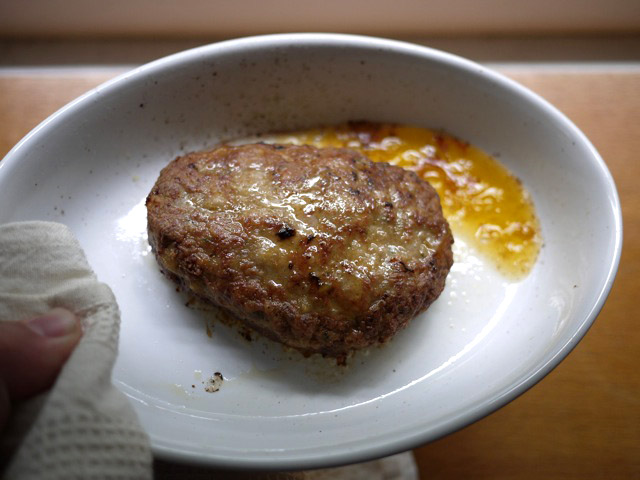 While my tried and true method for an extra juicy doneness is Kentarou's initial pan-frying then steaming, I've also been experimenting with different cooking styles. This day I pan-fried as usual but with a coating of flour on the patty. After giving some good color on both sides it's then finished up in the oven at 350-F until juices run clear. 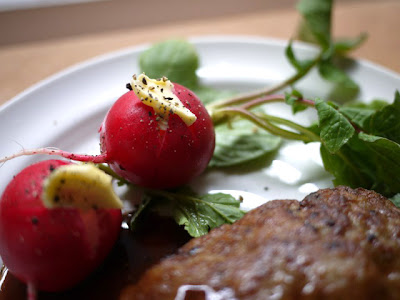 The sauce was a Demi Glace concentrate from a jar, but I spazzed out and embarrassingly spilled half of the reduction out of the pan, haha. So it ended up being a part demi glace, part shoyu/mirin reduction. Talk about never doing things the same twice, the same goes for the sauce I guess. 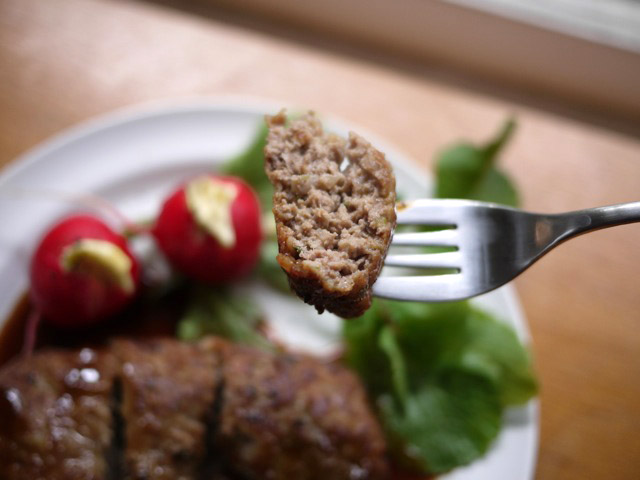 I'm liking the coating of flour which creates a tasty invisible crust around the patty and seems to also help any sauce you pour over adhere better. The baking step definitely gives an extra roasty/nutty こうばしい aroma on top. You'd think I wouldn't recommend the less juicy finish but was still plenty moist and I actually liked how the sauce stays undiluted. A different style and execution, I'm split 50/50. 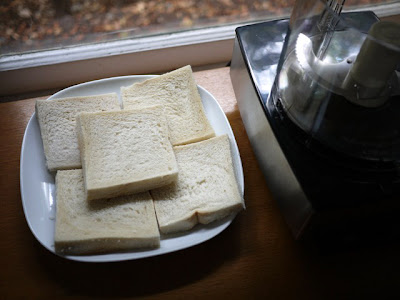 Next, something coated in panko then deep fried... I had a partial loaf of Japanese shokupan that I failed to use up before going stale so decided to make some Nama-Panko (fresh panko). The ears were cut off then minced in the food processor in small batches. I've tried the grating method in the past but this works much better and was way easier. In any case a whole lot cheaper than if you would purchase. I found a smaller packet selling for about four bucks, ouch. 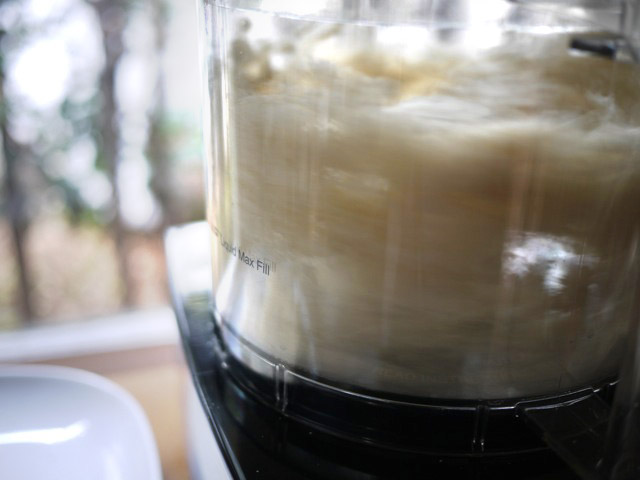 For my ultimate meaty and juicy Menchi Katsu I actually wouldn't use a Hambaagu recipe, but very often they would be made the way. 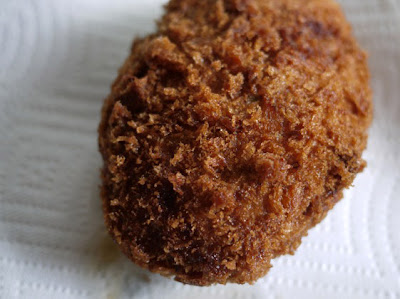 The ubiquitous trio of when doing any "Furai" (Fry). Flour, eggs and panko. Oh why didn't I buy shrimp and oysters! 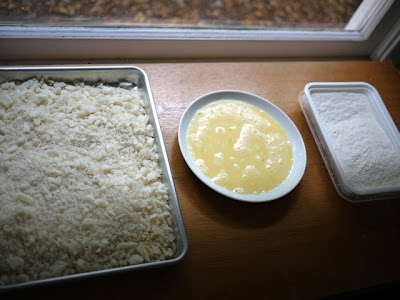 Does my flour container look familiar?? Yup, it's my Katsu Sando box from Hinotez, haha. When I'm done I just place the lid back on and reuse again later. 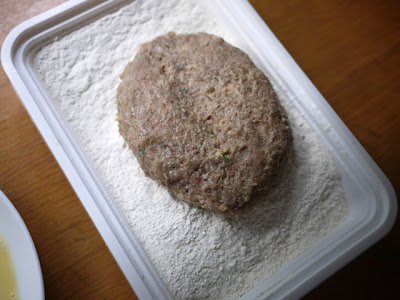 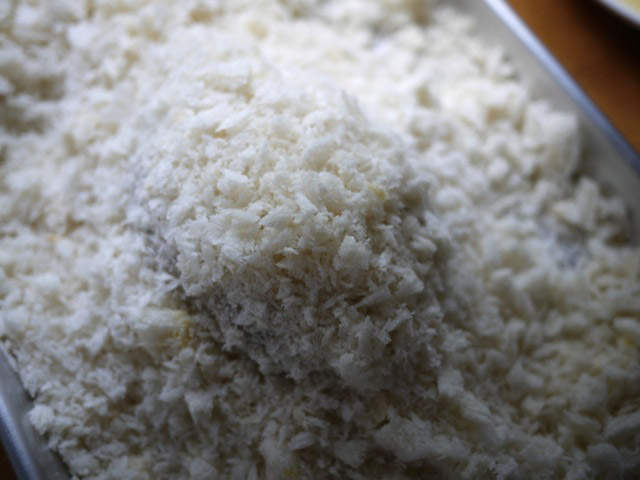 But would give the actual execution a C+/B- maybe. I just don't deep fry things enough on a regular basis (which probably isn't a bad thing). Kinda reminded me of my Mille-feuille Tonkatsu trial experience. Had this with some Curry Rice. Here a retort package S&B Golden Curry which I've yet to do an official report on. 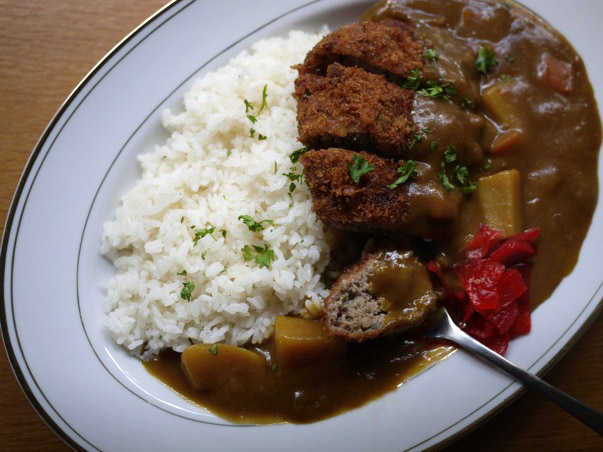 Last but not least, a delicious Lasagna. The original recipe came from a Japanese television show on Yokohama's legendary Yoshoku Kimura. The meal was said to be a makanai (a non menu, behind the scenes meal for the restaurant staff). 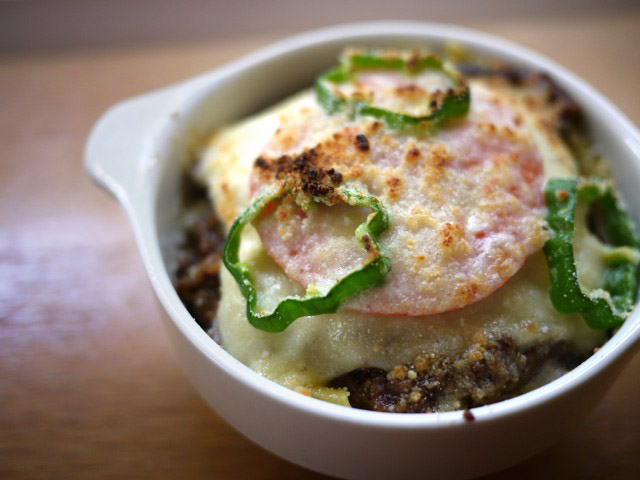 When I say Lasagna, a loosely interpreted one because it's technically not in many ways.
First, instead of using the typical extra wide ribbon pasta, it calls for Pappardelle. This is because it was easier for the crew to eat as a quick meal. Second, instead of tomato sauce, it incorporates their famous Demi Glace. And last, it's not really baked, only sitting under the broiler long enough for the cheese to melt and give some color (4~5 minutes).

Fry up a serving of Japanese Hamburg pate in a pan and flambe with white wine. Was supposed to combine with some cooked diced veggies but I got lazy and skipped. During the show it called out for small cubed eggplant, carrots, potatoes and mushrooms. 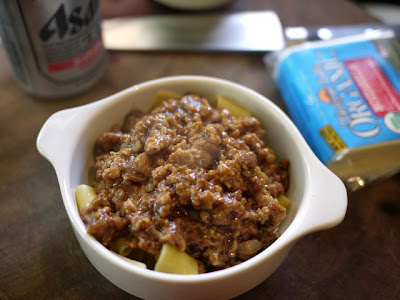 The cooked pasta goes into an ovenproof dish, a portion of the demi meat sauce is ladled over, then topped with a slice of white cheese (I happened to have mozzarella). A thin slice of fresh tomato, Piiman bell pepper, and further sprinkle of Parmesan. It's usually then hit with some white (Bechamel) sauce before going into the oven but a drizzle of heavy cream can be substituted which is what I used. The plate is finished under the broiler until lightly browned. 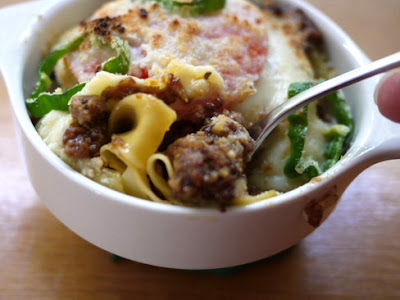 OMG, was so good. Will definitely be making this again as I just made another two pound batch of pate yesterday, haha. Hope everyone is having a great weekend. Thanks for visiting!
Posted by Dennis K. at 10:03 AM 6 comments: