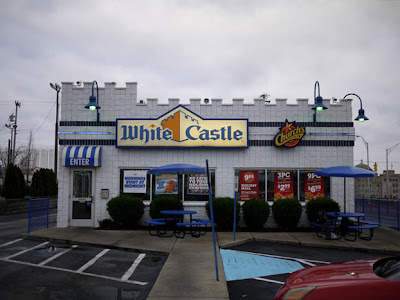 Still have a few more food related posts to share from my Nashville business trips last year. The days started very early so it always felt like I was running tight on time, but one morning (in partial feeling of hunger and partial curiosity for sake of blogging) I decided to swing by White Castle for their relatively new breakfast offerings. 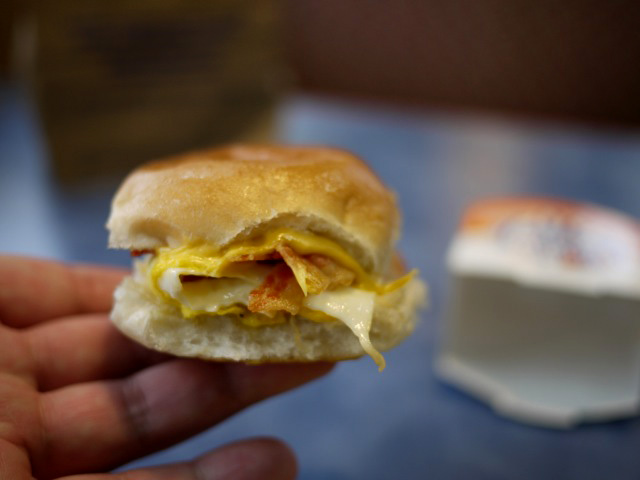 I first heard about it on Mr. Dave's Ridiculous Food Society of Upstate New York blog which unfortunately has been offline recently. The gist was that these guilty bite sized breakfast creations were made on the same griddle to order with fresh cracked eggs. 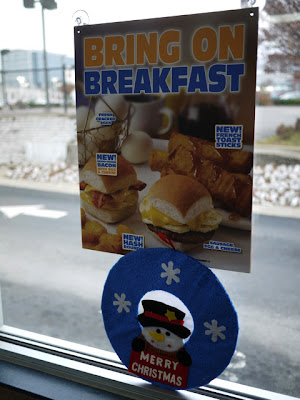 Aside from the Bacon-Egg-Cheese and Sausage-Egg-Cheese sliders that I got ($1.49/ea.), there are the fat coin shaped "Hash Rounds" and also French Toast Sticks. Below my greasy brown bag which came to me handed that way from the cashier. The contents of the plastic bag is my early Christmas gift to meself. Fyi on the back table you can see a large piece of duct taped, carpeted cardboard which was owned by a homeless person. I probably would've been more in the giving Holiday Spirit if he weren't cussing profanity to himself, but anyway. 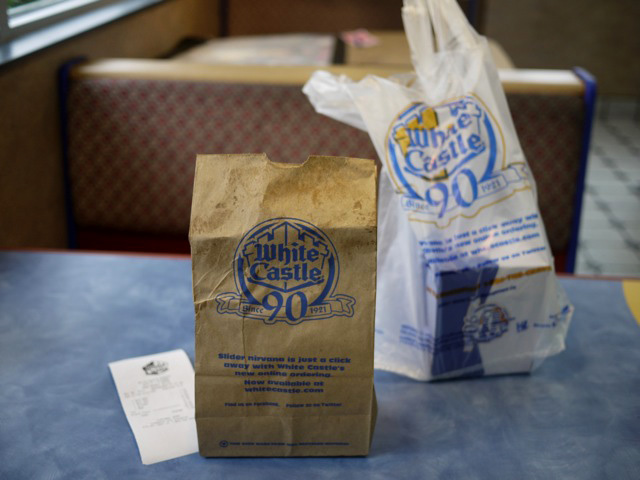 While you probably only get about half an egg per slider, these were a tender spatula split marble of yolk and whites, perfectly complementing the salty/greasy proteins. At first felt could've popped twice as many but despite the looks they were deceptively filling. 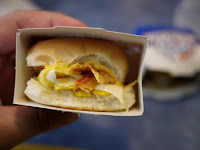 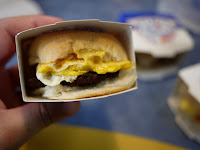 I had to also do a basic slider ($0.68) since it had been a while. (My first White Castle experience post from 2009 here.) I don't know, as junk food flavored as they are I still think they're pretty tasty. The square sliver of greasy beef patty with sweet onions, a dill pickle coin pinched between steamed buns. Of course I've only had one (you start to feel it from the third or fourth...), but I just know one of these days I'm going to get a Crave Case. 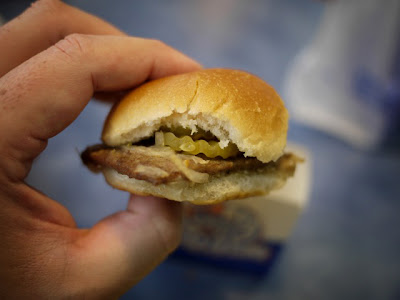 The early Christmas gift btw was their 90th Anniversary Mug Cup. I know you're Jealous! ;) 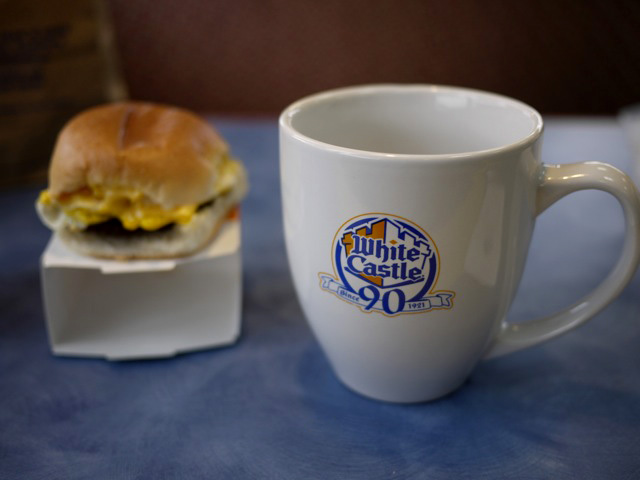 Wanted to quickly also share my drop into a Krystal while I'm at it. Was during a random fuel fill up when I noticed the gas station had one attached. It was before dinner but again, in partial hunger but also partial curiosity for sake of blogging... 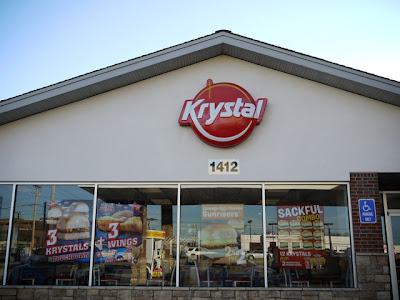 It seems the Krystal franchise is a lot more prone to various promotional trials. If I remember right aside from a basic Cheese Krystal, I had one with BBQ sauce and another with Chili. 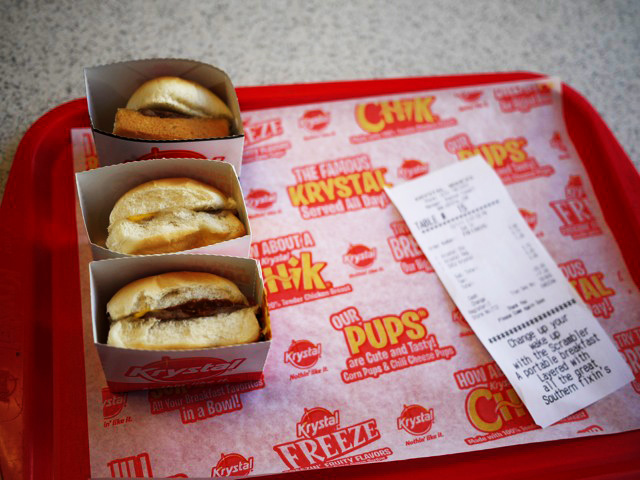 These perceptively looked larger and I was anxious to finally try, but they just didn't seem do it for me like the White Castles. Maybe it was how the buns could've been more moist but I still felt the bread-to-filling ratio was leaning a little too toward bread. 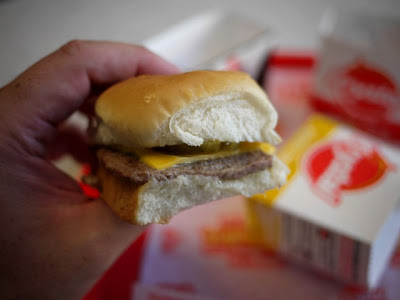 Maybe one day I'll have a chance to try their breakfast. Grits, scrambles and Jimmy Dean patties? I'm in. :)

And an old Krystal commercial with very young Samuel L. Jackson. Apparently this was before the Big Kahuna Burger, haha.

Sharing a cobbled up weekend lunch made with some leftovers from a couple months back. Had dinner with friends that week at Little Sheep Mongolian Hot Pot. As usual the meal ended with some noodles, but it was the first for me to find out that the soup was available to take home. "I can do this again the next day!??" I then proceeded to fill the provided extra large Styro cup with last scoopable ladleful. 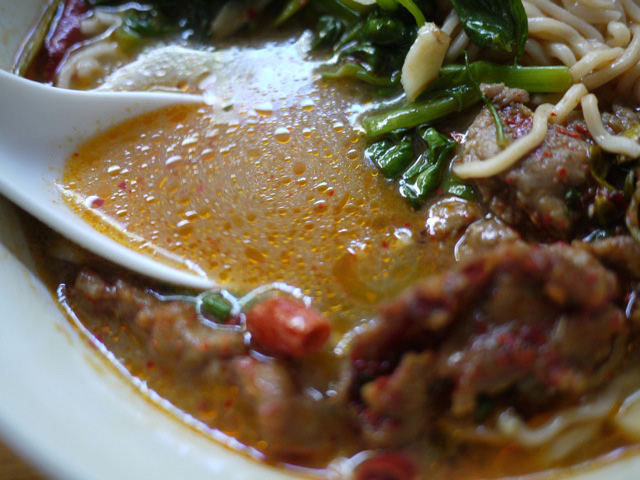 The soup by then is full of all the various vegetable, mushroom and meat goodness. A kaleidoscope of umami that is miles better than when first starting the meal. I do have to admit though that the base soup that they are so generously willing to pour and top off your pot always tasted somehow very 'synthetically enhanced' to me. The website says it is MSG free and made from scratch daily. If they say so, but it is inarguably tasty nevertheless. 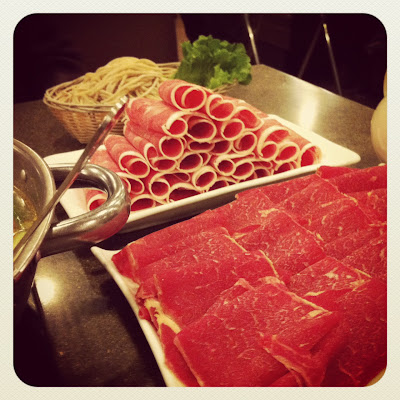 The friends sensitive to heat took the white original soup and so I went for the lava red spicy. A few days later with additional leftovers from Spicy City I decided to make a meal of it. Thought the clingy characteristics of wavy chijire noodles might work better for the brothy soup and so pilfered a serving from one of my nama Shoyu Ramen packages. 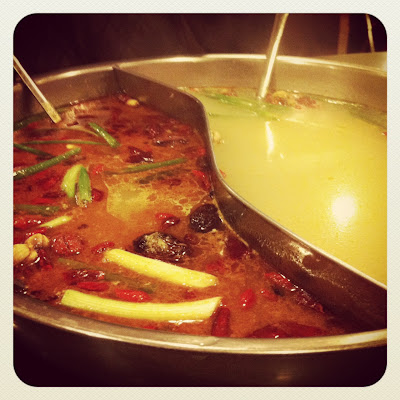 I have my twirl technique for plating spaghetti, but for ramen it's always the "Lift & Drape..." 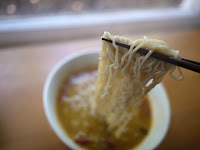 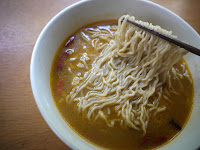 But this day a moundful of greens and protein would be hiding it anyway. Snow Bean Leaf with Garlic and also some Cumin Lamb (Fried Lamb with Cumin on the menu). 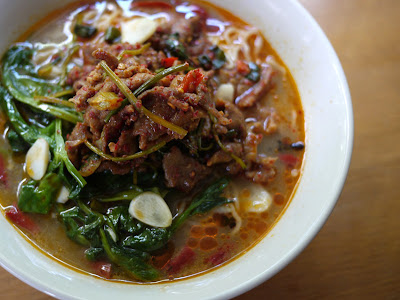 I actually didn't enjoy all that much this version Cumin Lamb from SC. The cumin flavor was very low and the overall savory flavor also lacking. I prefer the version at DeDe's much more but I haven't been back there to try it again since the new (again) ownership (the Mapo Doufu did change). But anyway, despite, it easily worked well as a topping for this spicy lamb-centric broth. The delicious hot soup that I would be having with my spoon.
Posted by Dennis K. at 11:47 PM 3 comments: