Food on television isn't a new topic for my blog but focusing on individual shows are. The ones I'll be covering in this series, at least for the first few, will mostly be Japanese but I'll eventually be going over more. They'll range from variety (baraetii) types, to dramas, documentary styles, to actual cooking shows. 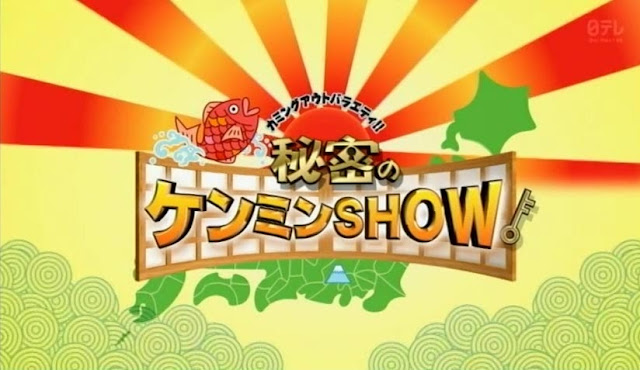 For the inaugural is Himitsu no Kenmin Show (Official Site & Wiki page) which roughly translates to "The Secret Locals Show"... I actually remember mentioning quickly in an older Random Rambling post but the program is also nicknamed the "Coming Out Variety," alluding to how these many previously unknown facts of certain regions in Japan are introduced every week, all represented by selected celebrity guests who are also from. Not surprising my hometown Okinawa gets its share of airtime but many other areas are also equally and what's shared maybe more unexpected. 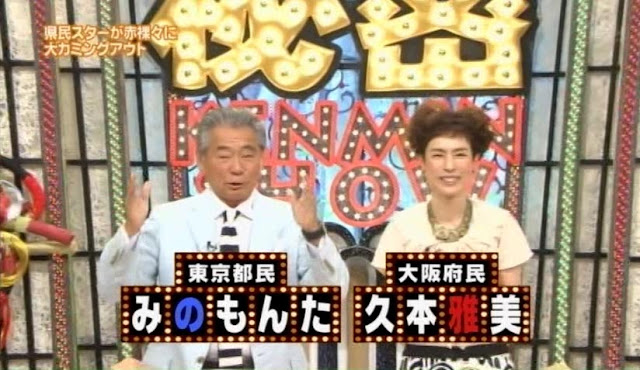 Hosts are your venerable veteran Mino Monta and my favorite, comedian Hisamoto Masami. Below 'kenmin' celebrities ready to represent y'all! 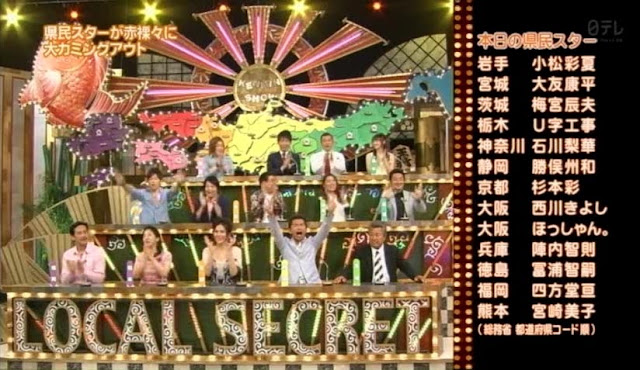 Contents of the program are maybe a cross between NPR's A Way With Words and Jane and Michael Stern's Roadfood section on the Splendid Table, but with a good healthy dose of sporadic humor from Wait Wait Don't Tell Me all balled up into one. The portion of the show that goes over unknown regional eats is called "Himitsu no Gotchisou" or "The Secret Feast." 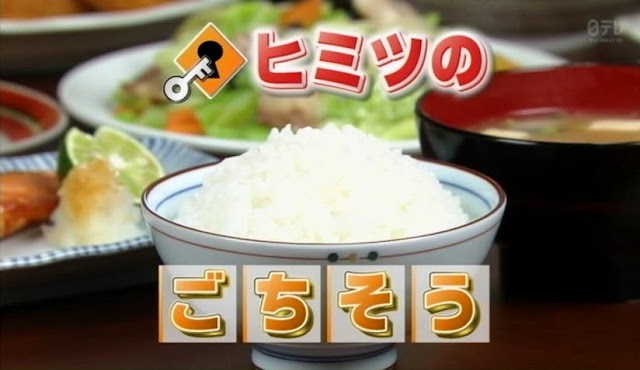 Subjects are meals that are not known even to the most well-informed Japanese foodie. Uncovered are the many specific micro-regional facts that often turn around most conventional and typical thinking. For example many may say udon noodles must be firm with a lot of koshi chew? Well that notion was popularized by the Sanuki region of Japan in the last decade or so, maybe two, and there are in fact many parts of the country that prefer a softer, longer cooked udon, some even that has the delicious flavors of the broth soaked within. Sapporo Ramen is another good example where to most a slab of butter and some corn toppings would be an apt description. But the truth is that this style was invented in the city more for tourists visiting Sapporo, and most local Sapporo-ites prefer a plain miso ramen (a bowl from Sumire would be a good example). 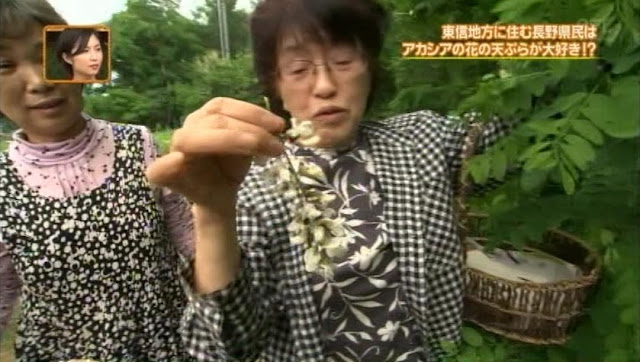 So a few more recently highlighted from the show. In this episode they go over the friendly peeps in a specific Eastern region of Nagano prefecture that love their Acacia flower tempura. Very seasonal, according the best are ones where the flowers are still a bulb and not fully bloomed. 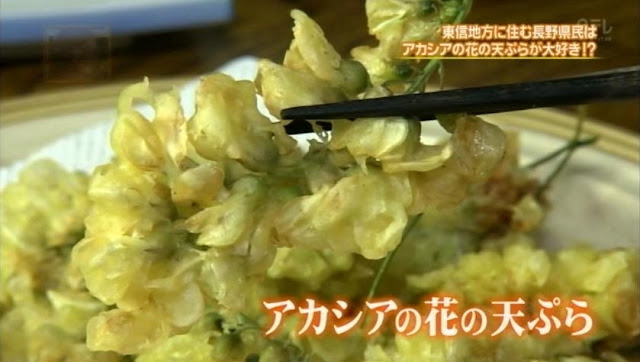 Another much more quirky is what is called the Potechi-pan (ポテチパン). Potechi, short for "Potato Chips" which is said to be a popular snack-pan in the Kanagawa, Yokosuka area. I was surprised to hear of this because I lived in Kanagawa for six months and not heard or knew anything of.(!) But this often is the case of the things introduced on the show. 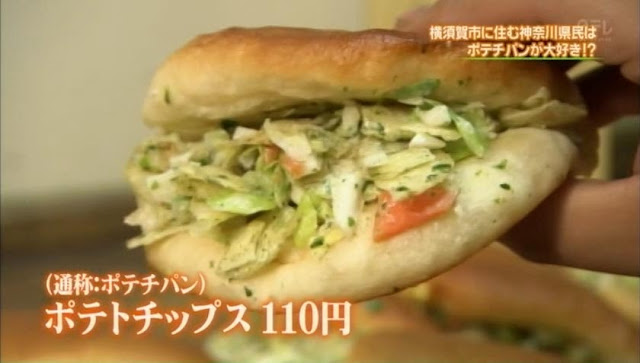 Occasionally found served even on the menu in local school lunches, there are several variations but shown uses a mix of light coleslaw with crushed Nori Shio flavored chips. It does get wilted but fans say that it is all part of their addictive attraction where most of the crunch comes from the slaw. 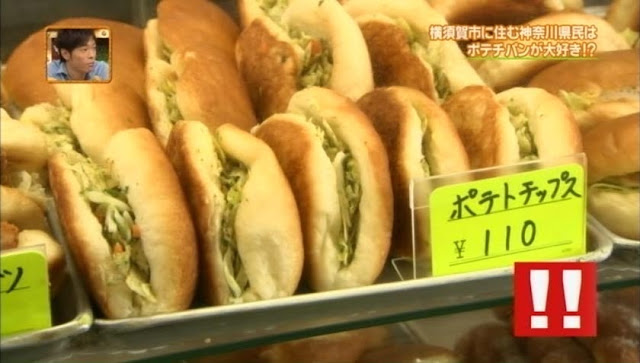 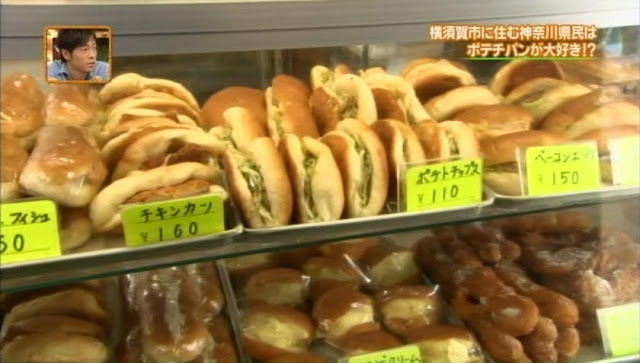 Legend goes that the first potechi-pan was made when a snack wholesaler had an over abundance of potato chips that needed to be rid of and had asked a town baker if they could make use of it. After some experimenting, out came the potechi-pan and soon after a loyal (albeit very local) following. 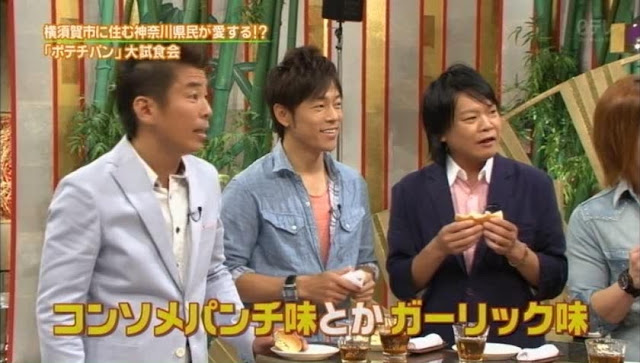 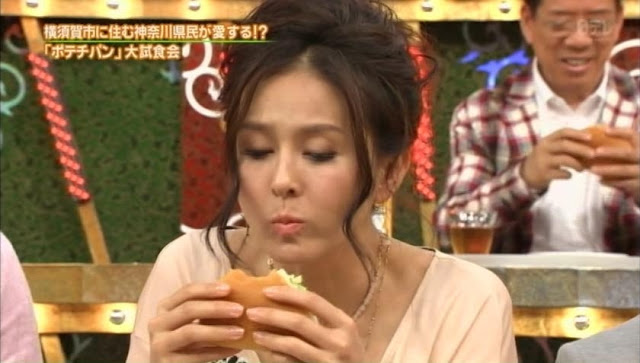 Each segment usually ends with some celebrity tastings, giving it the big Ok nod. Oishii des!

"Harmonica" is a nickname given to the muscular and cartilage connective base of the Mekajiki's (swordfish) iconic dorsal fin. As far as it is known, Kesennuma (city in the farthest northeastern end of the Miyagi prefecture) is the only area in Japan that has a strong culture in its consumption. The name comes from the flat, fluted look of the cut that resembles somewhat a harmonica musical instrument. 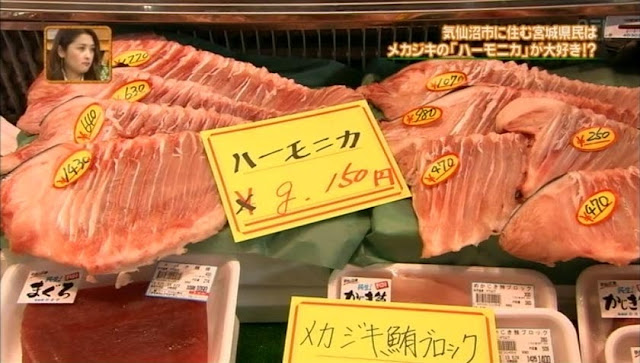 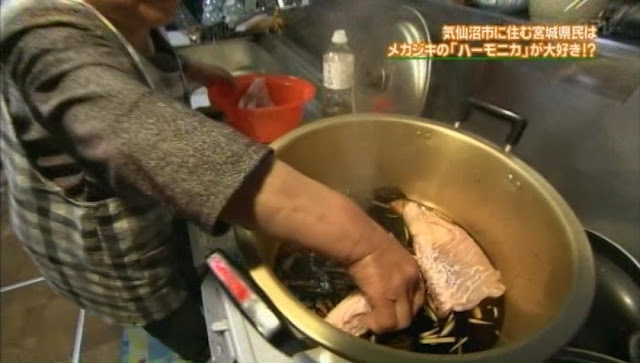 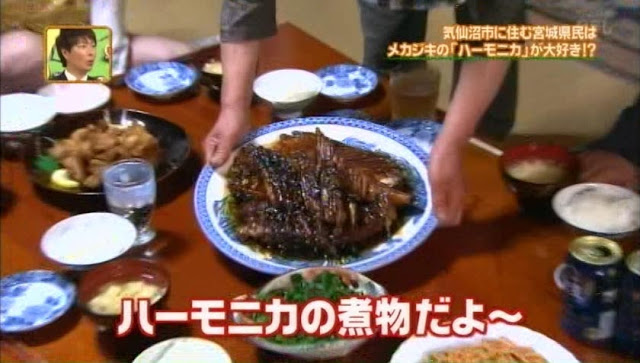 Friend of the working class, Mekajiki Harmonicas are usually sold at bargain and when long-simmered as a nitsuke (a recipe using Soy Sauce, Sake, Mirin, Zarame coarse light brown sugar and ginger) it is a delicious plate of collagen city. Texture is said similar between the prized tuna nakaochi and collar meats. Sounds good to me! 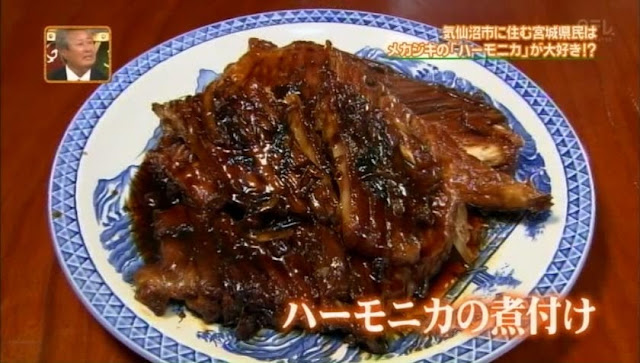 For the last I had to include a ramen of course. Micro-regionally specific to about ten stores in the Nakamura-ku discrict area of Nagoya city - Aichi prefecture is the very popular Tamago-toji Ramen or "Egg Drop Ramen." 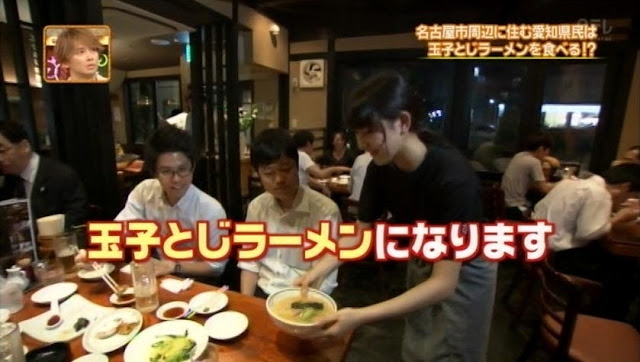 The show goes through the ins and outs of this phenomenon with interview with locals, its surprisingly long history and the supposed first shop who created it. Basically a Chuka shop (Manchinken) trying to create something new to offer to patrons and stand out from the crowd. A fresh egg is dropped in the bottom of the bowl where then a hot chicken/pork based soup is rapidly poured over. An experience of one is described more as light and fluffy rather than heavy (which it may look). I'd like to try one day! 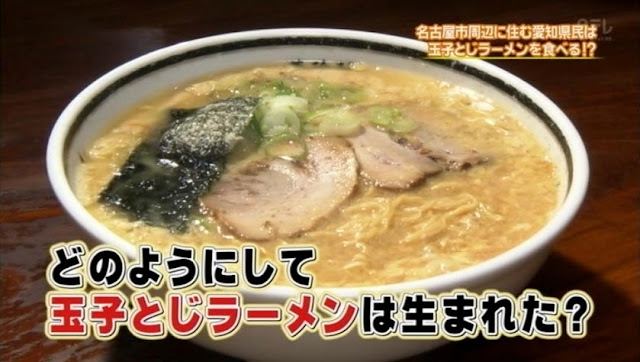 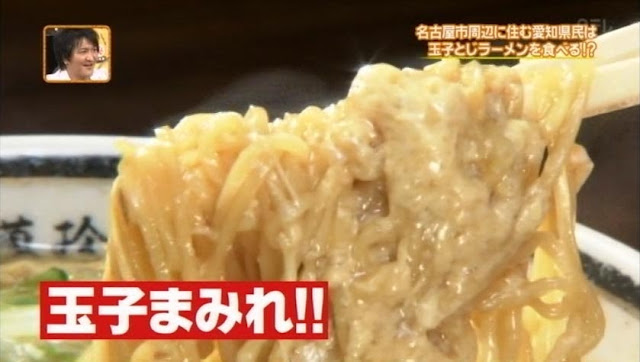 So there you have it, and again if you mention any of these to your friend/s from Japan, chances are they wouldn't have a clue what you're talking about. But each are definitely one of the many chips that make up the colorful culinary landscape of Japan, exciting and vibrant. For me it's actually strangely comforting to know that it would practically be impossible for a single individual (or book, or show, or blog for that matter) to exist that can entirely describe the state of a cuisine, ever diverse and evolving. And it's partly why Himitsu no Kenmin Show is one of my favorites currently on television.

Have you heard of the Tenderloin Belt? What about a Hot Fish Sandwich? :)
Posted by Dennis K. at 9:04 PM

It's a cool show. Sometimes it's a little too obscure though. I've talked to people that live one city over about the food featured on the show and they had no clue what I was talking about.

Hey Junichi! Actually the obscure stuff is usually what I'm more interested in, and the show does a good job at explaining it I think. But they do more mainstream close ups too, like the Sapporo episode which was fun. The Fukuoka, Nagoya and Kyoto ones were great too.