Hello there. Another nerdy report on a Japanese retort pouch curry. I should probably be covering the San Diego Fair like a proper food blogger would, but here I expose my more true nature of food sharing nerdity -- tasty curry from foil lined vacuum sealed pouches. I have 30+ to go through in the next six months so there will be more than a few of these on its way. 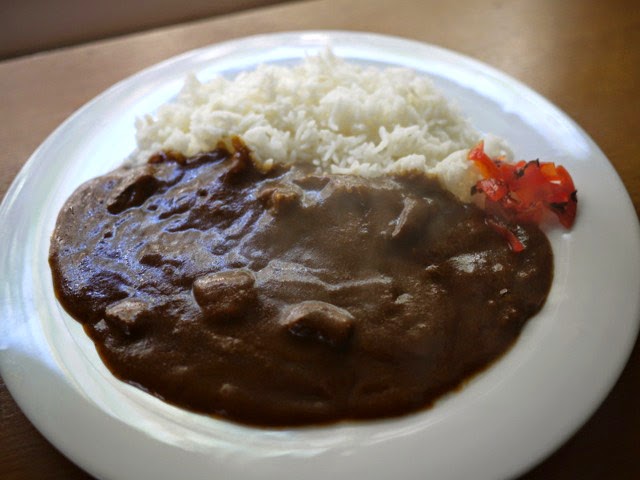 I've written about Glico's Beef Curry LEE X5 back in 2011 and really enjoyed it. I've since been trying to get my hands on their annual summertime limited run X30 for a while and finally managed thanks to a friend.
Ezaki Glico, known more here for their popular Pocky sticks isn't a retort curry powerhouse, but in the mid 1980's managed to carve its own niche by jumping on the then Geki-kara or "Extreme Heat" boom with its LEE Beef Curry series. Currently the LEE brand line has expanded to Keema types as well as block and flake roux for home cooking and the name occasionally seen advertised with Japanese curry flavored snacks. 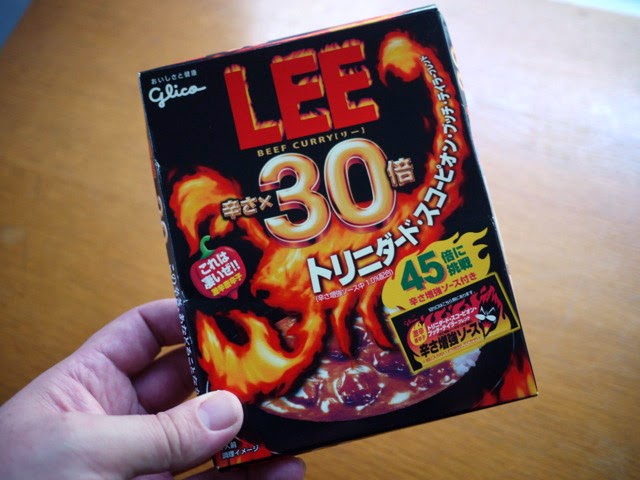 The limited run X30 features a special hot pepper blend each year and for 2013 it was the Trinidad Scorpion Butch Taylor which supposedly at one time was the hottest known (the spot to later be taken by the California Reaper). Other chile peppers featured in the past were the Bhut Jolokia (2008, 2011) and the Brazilian Pimenta de Cheiro (2009). 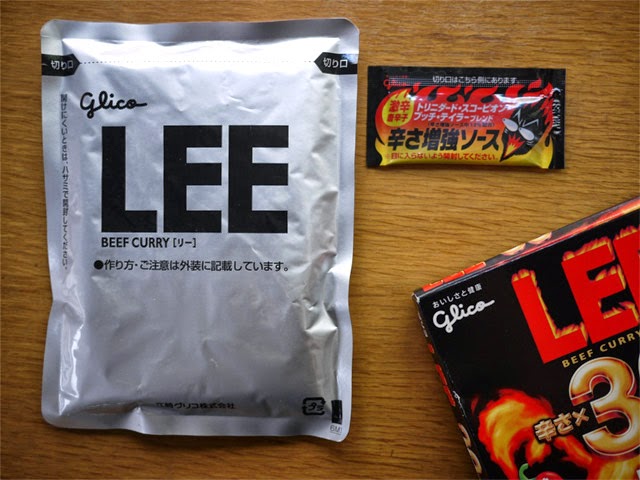 If the box's expiration date wasn't less than a month away that it was, I actually wanted to give this to my friend Kirk of Mmm-yoso the Scoville enthusiast I knew he was. Since I'm not a real big extreme spice heat fan, this experiment experience was more for my sake of documenting. 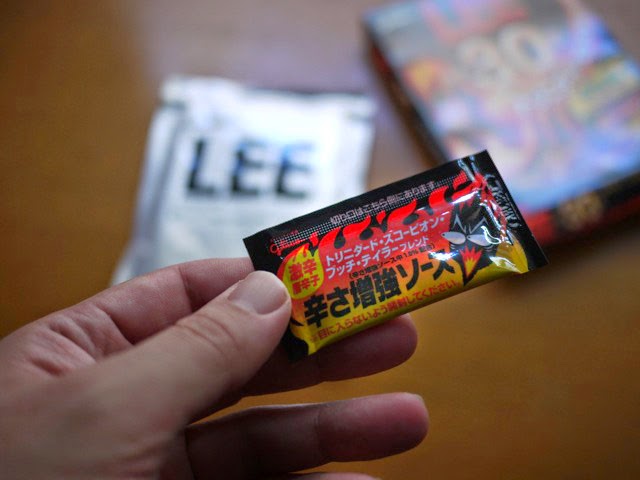 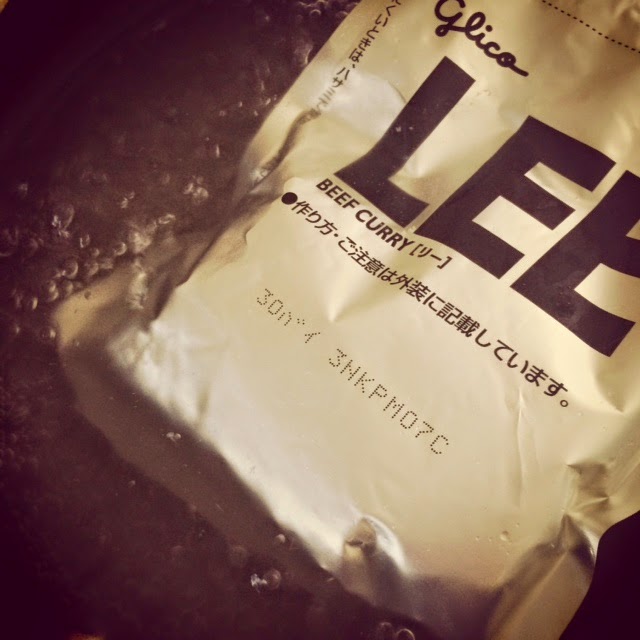 Prepping, I was at first a little bummed that a separate spice packet of the special pepper blend was included. I had thought it was something to be used to have the meal reach its ultimate X30 spice level. Turns out that this packet was for an additional X15 spice so to reach a potential max of X45 (!). All plated, finally time for a taste... 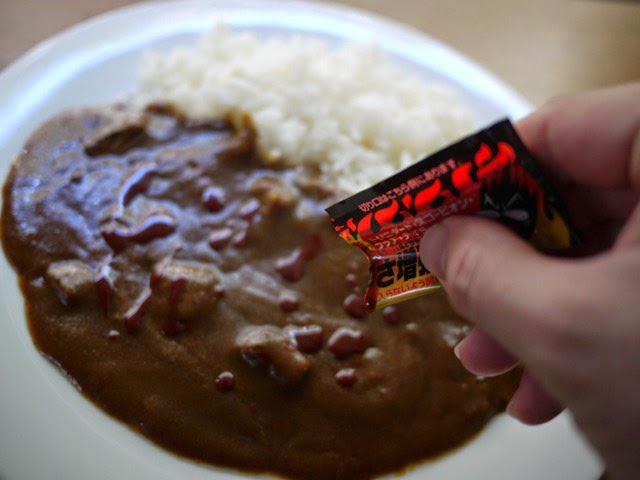 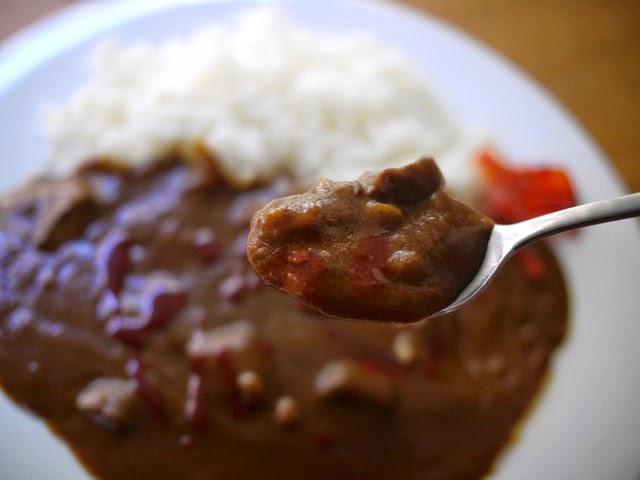 Not surprising a good amount of heat is immediately noticeable, but it takes a moment for the real burn to take affect which is the type that is slow and creeps up, much like the visual of volcanic lava inching its way across a rocky slope. Still, much like the X5 experience, the umami rich rue makes things very palatable, if at least at first. The leaner beef pieces were a bit tougher than I remembered but could have been due to the age of the packet.
Halfway through, the heat builds to the point that I'm sweating and having a tingling sensation on my face, chest also feeling warm like one of those infrared electric dish heaters. My last few bites I strategically avoided the areas with extra spice sprinkled (which had a less acidic, smoky rich flavor that I actually enjoyed if it weren't for the shear heat).

This was up there with the involuntary facial twitch inducing Nashville Hot Chicken I had at Prince's Hot Chicken Shack. The tormenting feelings of contradicting pleasure and pain. But it wasn't how I was feeling at the moment that concerned me most, it would be the morning after.(!)

Great post Dennis, and very "descriptive" too (Ring of Fire, ouch!). I never knew about these types of curries until reading your blog. I always learn something new. :)

LOL Dennis - I'll try and get you some Moruga Scorpion and Bhut Jolokia this year so you can make your own versions, ok? As much as I enjoy the "heat", I find the almost floral component is what I enjoy the most....until the burn starts.

Thanks CC! I can actually handle heat pretty well eating wise but it comes with consequences, haha.

Cool Kirk! My myoga plant is doing well so maybe I would have a chance.